Those who had organized protests against Sri Lankan President Mahinda Rajapaksaâ€™s participation at the inauguration of the London Olympics on the basis of a Sri Lankan sources but the Sri Lankan leader didnâ€™t turn up. 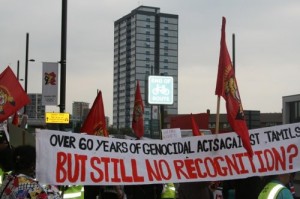 UK based sources told that the Global Tamil Forum (GTF), the British Tamil Front (BTF) and Tamils against Genocide (TAG) had made elaborate arrangements to launch a large scale protest campaign targeting Rajapaksa.

They felt the presence of the international media in London for the Olympics coverage could be exploited to heap pressure on the government over accountability issues.

Diaspora groups, which spearheaded mass protests during Rajapaksaâ€™s visits there in Dec 2010 and June 2012.

Â The SL presidential spokesman Bandula Jayasekera said that he never confirmed the Presidentâ€™s participation, though Jerome Taylor of The Independent inquired about the possibility.

Â The SL External Affairs Ministry told to the Colombo media that within hours after Taylor contacted Jayasekera, UK based Tamil groups launched a campaign probably on The Independentâ€™s assurance that the Sri Lankan President was coming for Olympics.

On the day of the inauguration of the Games, the Rajapaksa enjoyed a musical show at the Nelum Pokuna Mahinda Rajapaksa Performing Arts Theatre.

The police and military under Rajapaksaâ€™s command are involved in a systematic network of politically motivated disappearances as well as abduction for ransom.