<![CDATA[PKR-linked NGO leader has vowed to use force if necessary to prevent the Sri Lanka President Mahinda Rajapaksa from entering Malaysia for an international Islamic forum from Dec 4 to 6. <a href="http://www.eelamenews.com/?attachment_id=106250" rel="attachment wp-att-106250"> 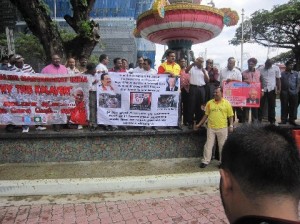 The People Welfare and Rights Organisation (Power) president S. Gobi Krisnan issued the threats after lodging a police report against Rajapaksaâ€™s arrival with other NGOs leaders today. The NGOs were upset that the government has planned for a red carpet welcome for Rajapaksa, whom they deem have committed genocide against the Tamil minority in Sri Lanka. â€œThe government has been hurting the Indiansâ€™ feeling in this country, and now the invitation is an insult to Indians. â€œWe will use all means, including force if necessary, to stop him from coming,â€ he said. The group would stage a protest outside of the parliament building on Tuesday, and have planned for similar rallies at the forumâ€™s venue in JB. The 26-year civil war in Sri Lanka ended in 2009 with the government armyâ€™s quashing Liberation Tigers of Tamil Eelam and re-established control of the northern part of the country. It was reported that some 100,000 civilians including 40,000 of Tamils were killed while more than 300,000 people were displaced during the long-standing conflict. The United Nations Human Right Council had on March adopted a resolution to urge the Sri Lankan government to take all steps necessary to ensure accountability for alleged serious violations committed during the final stages of the countryâ€™s civil war. However, Malaysia was among the eight countries that abstained in a vote that saw 24 in favour and 15 against the resolution. AP Raja Retinam, member of the NGOs umbrella group Sri Lanka War Victim Concerned Team (Api), has taken Prime Minister Najib Tun Razak to task for the abstention. â€œHe is a real hypocrite. When the Israelis launched attacks against the Palestine, he tabled a motion to condemn the violence. â€œBut when it is about Sri Lanka war crimes, he abstained, despite knowing very well that there was a great pressure on him to vote against Sri Lanka,â€ he said. He urged the government to stop its double standard and prevent Rajapaksa from entering the country. â€œRajapaksa and (Israeli Prime Minister) Benjamin Netanyahu are the same people. If you say no to Benjamin, then you must also say no to Rajapaksa. â€œIf they say the forum was meant for business discussions, then I challenge them to invite the Jews to attend, they are the richest people in the world,â€ he said. The NGOs held a protest at the Sri Lanka embassy in Ampang this afternoon while MIC Youth has also lodged a police report against Rajapaksaâ€™s arrival. (Free Malaysia Today)]]>