<![CDATA[UN Secretary General Ban Ki-moon, former UN Chief of Staff Vijay Nambiar and former UN Under-Secretary General for Humanitarian affairs Sir John Holmes are complicit in Sri Lanka's genocidal onslaught on Eezham Tamils in 2009, declared a protest held by political activists and grassroot movements in Tamil Nadu on Sunday.Â  May 17 Movement, the organisers of the protest, citing the recent report of the Internal Review Panel on UN Action in Sri Lanka led by Charles Petrie,Â  accused the â€˜axis of the UN trioâ€™ for shielding the Sri Lankan government during the peak of its genocidal onslaught on the Eezham Tamil nation.Â  The demonstrators, who blamed the UN for denying justiceÂ  to the victims after the genocidal war, also accused the UN for having failed to provide a just political solution to the national question of Eezham Tamils.<strong> 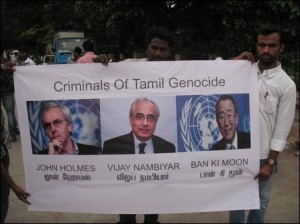 Mr Vijay Nambiar, an Indian diplomat, who isÂ  alleged of responsibilityÂ  in theÂ  white-flag surrender, is the brother of Lt. Gen. (Retd) Satish Nambiar, who was earlier invited by the SL government during the CFA to report on the military High Security Zones in the North and East. According to the accounts of the late veteran war correspondent Marie Colvin, Mr Nambiar had an assurance from the Sri Lankan President Mahinda Rajapaksa that LTTE’s Political HeadÂ  Mr Nadesan would be safe in surrendering to the Sri Lanka Army carrying a white flag. Although Mr Nambiar was supposed to witness to the surrender in person, he had concluded that it was not necessary for him to witness the episode as he had SL president’s assurance. Sir John Holmes, was the chiefÂ  of UN’s humanitarian operations in his role as Human Rights Co-ordinator when the UN pulled out of Vanni. He has also been visiting the island at theÂ  height of the war. 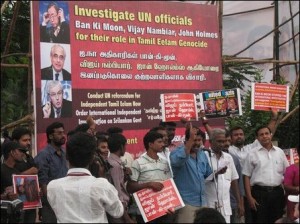 The gathered activists in Chennai also raised slogans in solidarity with the protesting Eezham Tamil students in the island, demanding the immediate release the student leaders of the University of Jaffna and the students who have been detained by the occupying Sri Lankan military. Prof Dheeran, the president of Thamizhaka Vaazhvurimaik Kadchi, Avadi Antharidoss from MDMK, Aruna BarathiÂ  from Thamizh Theasiya Pothuvudamaik Kadchi, Thapasi Kumaran from Dravidar Viduthalaik Kazhagam, ThiyaguÂ  from Thamizh Theasiya Viduthalai Iyakkam,Â  film director Pugazhenthi Thangaraj, Umar and Thirumurugan Gandhi from May 17 Movement spoke at the demonstration. (Tamilnet) 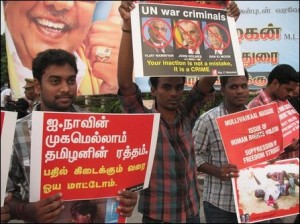