Children of Idinthakarai village, Kudankulam with postcards they have written to the Russian Ambassdor in New Delhi, requesting him to reveal the documents of the secretive Inter-Governmental Agreement (IGA) signed by India and Russia on the liability for the Koodankulam nuclear plants. 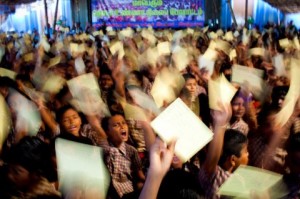 The postcard campaign was part of a series of events organised to pay homage to the victims of Hiroshima, Nagasaki, Chernobyl and Fukushima on August 06, 2012. Photo by Amirtharaj Stephen