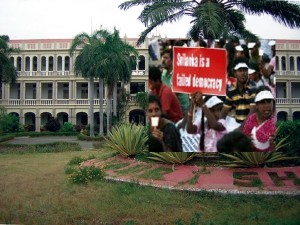 The government has asked 438 arts and science colleges in Tamil Nadu to be closed immediately till further orders as student organisations across the state gear up to organise massive protests from Monday.

The students are demanding that India vote against Sri Lanka on a resolution expected to be moved at a meeting of the United Nation’s Human Rights Council in Geneva this month.

The US is expected to move the motion against Sri Lanka on war crimes and rights violations against Tamil civilians during the final phase of the war against the Liberation Tigers of Tamil Eelam. All political parties in Tamil Nadu have been pressuring the Indian government to vote against Lanka.

The government’s decision to close colleges is being seen as a bid to avert any law and order problems on the campuses.

Though students have joined in the demand, their protests, over the last one week, so far have been unorganised, with mostly law students holding hunger strikes or demonstrations. In one instance, cops moved out eight students of a city college, who were sitting on an indefinite hunger strike, citing their deteriorating health. More students are expected to join in the protests from Monday.

The emotive Sri Lankan Tamils issue was resurrected recently when British media released photographs that suggest that the 12-year-old-son of Prabhakaran, the chief of the rebel Tamil Tigers, was executed in cold blood by Sri Lankan forces in 2009. Colombo says the photos are morphed.

In the Indian Parliament, the DMK, which is a partner in the UPA government, has made both poignant appeals and threats to demand that India show its support for Tamils in Sri Lanka. It has asked the government to make its stand clear, something that it is yet to do.

The Congress-led UPA government had voted against Sri Lanka in another resolution last year following pressure from the DMK, which had then threatened to pull out of the coalition at the Centre