<![CDATA[Activists of the Social Democratic Party of India (SDPI) were removed by the Tamil Nadu police, when they attempted to stage a rail blockade agitation opposing the proposed visit of Sri Lankan President Mahinda Rajapaksa to Madhya Pradesh yesterday. <a href="http://www.eelamenews.com/?attachment_id=102547" rel="attachment wp-att-102547"> 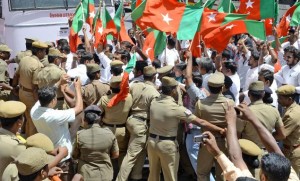 Leader of the Opposition Sushma Swaraj had invited Mr. Rajapaksa for laying the stone for the proposed Centre for Buddhist Studies in Sanchi in Vidisha constituency in Madhya Pradesh. Students of the Government Law College at Marudhamalai resorted to a road blockade and burnt Rajapaksa in effigy. Police and revenue officials held talks with them after which the road blockade was withdrawn. Traffic was disrupted for more than half-an-hour.]]>