A tsunami triggered by an earthquake has hit the Solomon Islands, with at least four people reported dead. The quake, with a magnitude 8.0, struck at 01:12 GMT near the Santa Cruz islands, part of the Solomon Islands nation, the US Geological Survey said. 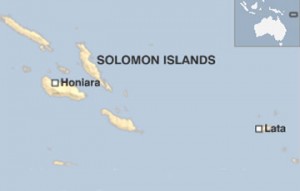 A tsunami measuring 0.9m (3ft) then hit Lata in the far eastern Solomons and a tsunami warning was briefly trigged for several Pacific nations.

Lata is the main town on Nendo, also known as Santa Cruz Island, which is the largest island in the Santa Cruz island chain.

The worst of the damage was said to have been on the western coast, with one report putting the waves there at 1.5m.

Robert Iroga, press secretary to the Solomons prime minister, told the BBC that the waves west of Lata had travelled some 500m inland, and that three villages had been damaged.

He said the latest reports from the region were that four people had been killed.

Police are travelling to the area, he said, and the priority is to ensure the local airport is functioning so aid and supplies can be flown in.

But medical staff at the Lata Hospital put the number killed at five – four elderly people and one young boy.

Irene Scott, who works at the Power FM radio station in the Solomons, said several people had gone to local hospitals for injuries including broken bones.

But she told the BBC that most people had moved to higher ground as soon as the quake was felt, reducing the casualties.

“We have small waves come in, then go out again, then come back in. The waves have reached the airport terminal,” he told the news agency.

“No tsunami threat exists for other coastal areas although some may experience small sea level changes,” the Pacific Tsunami Warning Center said.

The Solomon Islands form part of the Ring Of Fire, a zone of volcanic arcs and oceanic trenches encircling the Pacific basin.

The 8.0 earthquake was followed by several aftershocks, the largest measuring 6.6 magnitude.

The region has been experiencing a series of smaller quakes in recent days.

In 2007 an 8.1 magnitude earthquake triggered a tsunami that killed at least 52 people in the Solomons and left thousands homeless.(BBC)