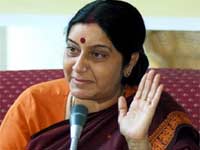 A writ petition has been filed in the Madras High Court finding fault with the Leader of the Opposition in Lok Sabha Sushma Swaraj’s meeting with  Lankan minister and EPDP paramilitary group leader Douglas Devanantha, an absconding accused in criminal cases. Justice N Paul Vasanthakumar, before whom the petition from A Irulandi of Meenambalpuram in Madurai came up for hearing on Friday, ordered notice to the State Home Secretary and the DGP, returnable in eight weeks. The petitioner contended that Devananda had been involved in a murder case and few other criminal cases and he was absconding. A lower court concerned had issued a proclamation order also. While so, a team led by Sushma met him during her visit to Sri Lanka on April 16 this year. If Sushma and her team were questioned, the whereabouts of Douglas would come to light and the police could bring him to India to face the pending trials, the petitioner contended. In this connection, he had sent a representation on April 24, the petitioner said and prayed for a direction to officials concerned to dispose of his representation.(iBNlive)]]>