<![CDATA[Convener of the Movement for Equal Rights Ravindra Mudalige alleges the government has failed to guarantee at least the basic rights of the northern and eastern people even more than three years after the war. He was speaking yesterday (Dec. 18) at a protest in front of Colombo Fort railway station to demand freedom for the arrested Jaffna student leaders and demilitarization of the two provinces. <a href="http://www.eelamenews.com/?attachment_id=107356" rel="attachment wp-att-107356"> 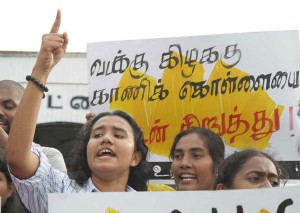 He went onto say that the southern people, who had been silent when Koneswari was killed, and Nimalaruban and Delrukshan were murdered at Vavuniya Prison, were now experiencing similar incidents in Kahawatte and at Magazine Prison. The oppressed Sinhala, Muslim and Tamil communities should unite against the racism that had always brought victory for the rulers, he said. National committee member of Movement for Equal Rights S. Hider said people of the north and the east were now forced to prominently display a group photograph of their families at their homes. Democracy cannot be guaranteed at gunpoint and the two provinces should be demilitarized immediately, he said. 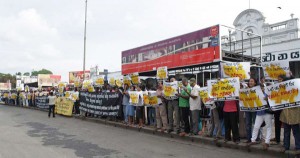