Sri Lankan President Mahinda Rajapaksa has congratulated his friendÂ Pranab Mukherjee on his election as Indiaâ€™s next President. 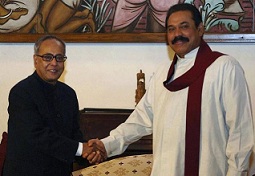 Mukherjee, a veteran Congressman who held External Affairs and Finance portfolios in the UPA cabinet, was elected as the 13th president of India yesterday.

Rajapksa offered his best wishes to the president-elect and also despatched a bouquet to Mukherjee.