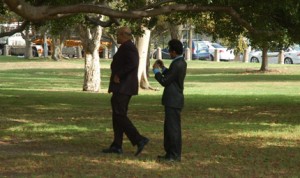 Melbourne, Friday – Sri Lankan Government operatives have been intimidating peaceful protesters at Test cricket matches in Melbourne and Sydney, according to the BSLCC, Lankanewsweb reports. Boycott Sri Lanka Cricket Campaign (BSLCC) organiser, Trevor Grant, said today that Sri Lankan men armed with cameras and video equipment had been stalking and filming people while they protested at the MCG and SCG in the past two weeks. “I was walking along Moore Park Road in Sydney by myself after handing out leaflets outside the SCG when I noticed a Sri Lankan man from about 50 metres away in the park taking photographs of me. I went towards him and he ran away to try to hide behind a big tree,” Grant said. “I also saw him taking close up photographs of protest signs. I went to approach him again but he kept moving away and seeking shelter behind the tree in the park. “He had another taller, well-built Sri Lankan man with him. They were also lurking in the distance taking video film of other protesters, including the group of Tamils there.

“ They were both well-dressed and obviously collecting evidence for their Government. There is no way they were press members because they wouldn’t identify themselves when I approached, preferring to skulk in the shadows of the big trees. Grant said that when one of the Tamil-Australians in the crowd saw them away in the distance he yelled out to them: “Stop hiding and come and take my picture, I’m not afraid of you guys,” Grant said. Tamil Youth Organisation spokesman Kartheeban Arul said it was a well-known tactic of the Rajapaksa regime to collect evidence of people who protest against his government and then use it in various ways to intimidate people.

“They are usually from the embassy and they do it all the time. They send the film back to Sri Lankan intelligence and then they will harass and even jail and torture relatives of the protesters,” he said. “But the Tamil people are determined not to be intimidated. We are protesting to tell the world about this ruthless, murderous regime and by doing this sort of thing they are doing our job for us. “It seems a bit of a contradiction, though, that people acting on behalf of a brutal dictator are allowed to intimidate and stalk Australian citizens under the noses of Australian police who are there monitoring very closely the movements of our peaceful protests.”

Grant said that when they kept filming him he went towards them again to try to take pictures of them. “I yelled to the guy ‘How would you like this sent back to police and have your relatives put in jail? He replied to me: ‘No worry. My relatives are all here now,’,” Grant said. The stalking tactics were also employed at the Boxing Day Test match in Melbourne. Two Sri Lankan men were filming the protests, one a stills photographer who admitted he was working for the Sri Lankan embassy and another with a video camera on a tripod who was dressed immaculately in a finely-cut suit and tie. A Tamil-Australian protester approached the stills photographer and objected to what he was doing on behalf of the Sri Lankan Government. The photographer said: “I’m just doing a job. I really understand what you people have been through.” Grant said these tactics were straight out of the Rajapaksa regime’s handbook but the group had been buoyed by the very positive reaction to the protests so far and would not be deterred. “We live in a democracy and you are entitled to take photos and film people in a public place but this is clearly intimidation and there are laws against such things,” Grant said. “The protests so far against the touring Sri Lankan cricket team have been very well-received. This team is being used to launder the image of a vicious regime. We will be continuing the rallies during the one-day and 20/20 series up until the end of January. ”Why would we stop when 66 per cent of readers in a Melbourne newspaper poll agreed that Sri Lanka should be banned from world cricket? ” For further information contact Boycott Sri Lanka Cricket Campaign (BSLCC) – Trevor Grant (0400 597 351).]]>