Home செய்திகள் Reconciliation means high level of militarization
Facebook
Twitter
Google+
Pinterest
WhatsApp
As post war Sri Lanka experiences a high level of militarization, the northern provinces of the country continue to face serious humanitarian and human rights problems. Three years after the end of a protracted conflict and war that ravaged the country for quarter of a century, the people and communities are struggling to attain a sustained peace and reconciliation. 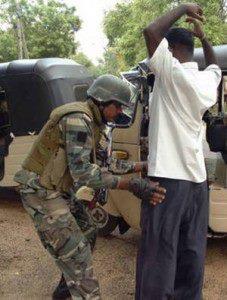 This warrants intensified efforts in building peace and reconciliation among people and communities, observed an international ecumenical solidarity team that visited the war-devastated northern regions of Sri Lanka from 28 July to 1 August.
The solidarity visit was organized by the Commission of the Churches on International Affairs (CCIA) of the World Council of Churches in collaboration with the Christian Conference of Asia (CCA). The visit took place as part of the CCIA activities in response to accompanying churches in the situation of conflict. The team visited the northern provinces including Kilinochi, Puthukudiyiruppu and Mullaitivu where the war finally ended three years ago.
The team met with church leaders, civil society actors and war-affected people. Sri Lanka suffered from decades-long ethnic conflicts and civil war between its Tamil and Sinhalese populations before the conflict officially ended in 2009. Since that time, all communities in the country strive to return to a sense of normalcy.
However, challenges remain as large populations of severely traumatized people require psychosocial support in order to become reintegrated into the community. Several hundred war widows and orphaned children struggle to attain the necessary day-to-day support.
Continued militarization remains a problem as large portions of the north are still occupied by military forces and most areas have been declared “high security zones” under the control of armed soldiers. This situation prevents the local people from access to and use of their ancestral land.
The delegation learnt from social workers and civil society organizations representatives working in the region that land grabbing by the military and denial of access to land for residential and community use is a pressing problem in both rural and urban areas in the northern provinces.
Quoting local witnesses interviewed in Mullaitivu, Dr Emily Welty, a CCIA member from the Presbyterian Church (USA), observes, “Although there are development initiatives taking places in many areas, the war-affected local communities feel that it is too limited and it needs greater participation by local communities in developing sustained peace and reconciliation rather than a military-controlled approach in development”.
Welty, a professor of Peace Studies at the Pace University in New York, said, “any post war reconciliation can be achieved only through active participation of affected communities in peace and reconciliation, but the people in post war northern Sri Lanka need to feel and experience trust and confidence as they continue to live in a vulnerable situation”.
Militarization is a threat to peace process
During a conversation with young war widows in Killinochi, the members of the solidarity team were told that “the concentration of large numbers of military personnel in rural and urban areas with a ratio of one armed soldier to four civilians adds more vulnerability to local communities, especially to women and girls who live in unsafe shelters.”
During a discussion with the members of the executive committee of the National Christian Council in Sri Lanka, Johnny Simanjunta, a member of the ecumenical solidarity team representing the CCA, who is also a member of the Human Rights Commission of Indonesia, shared his experiences from the visit.
“The rampant militarization process taking places in the northern provinces and the presence of armed soldiers in each and every corner even in remote villages will hamper the process of normalization of the unity and reconciliation, as the militarization process is threatening human security in northern Sri Lanka,” he added.
The delegation met with war-affected people who had lost limbs to landmines as well as women who witnessed the death of husbands during the last days of the war.
“Churches in Sri Lanka are in a unique position to engage positively in post war reconciliation involving members from both the Sinhalese and Tamil communities. The ongoing commitment of Sri Lankan churches to Sri Lanka’s peace and reconciliation mission and their engagement in humanitarian relief and reconstruction efforts, and the rehabilitation of war victims through interfaith collaboration, are unique examples of Christian witness which should be appreciated, recognized and supported by the international ecumenical community,” said Dr Mathews George Chunakara, director of the CCIA.
The CCIA director added, “The CCIA will be organizing a meeting in September with the participation of ecumenical partners and peace and reconciliation advocates from the ecumenical family to discuss how best to accompany the people and churches in their journey toward reconciliation in Sri Lanka, especially the Sri Lankan churches’ witness and mission of promoting a culture of nonviolence and sustained peace and reconciliation in post war Sri Lanka.”
More information on the WCC Commission of the Churches on International Affairs
WCC member churches in Sri Lanka
The World Council of Churches promotes Christian unity in faith, witness and service for a just and peaceful world. An ecumenical fellowship of churches founded in 1948, today the WCC brings together 349 Protestant, Orthodox, Anglican and other churches representing more than 560 million Christians in over 110 countries, and works cooperatively with the Roman Catholic Church. The WCC general secretary is Rev. Dr Olav Fykse Tveit, from the [Lutheran] Church of Norway.
GENEVA, Switzerland August 3, 2012 /Standard Newswire/ —