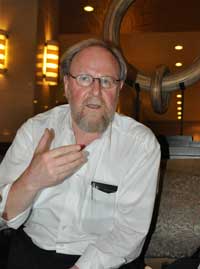 The reconciliation process in Sri Lanka remains unfinished and hugely controversial, a high-ranking German official concluding a three-day visit to Colombo said yesterday, after wide-ranging discussions with the Government, the Opposition and civil society representatives.

Thierse said the Government held a completely opposing view. â€œThey say huge efforts have been made to improve infrastructure and that economic growth has been stronger in the north east than anywhere else in the country,â€ the German official said.

â€œSo it shows that this is a hugely controversial issue and that reconciliation has not nearly been brought to a successful conclusion,â€ he added.
Thierse was born in East Germany and was the first East German President of the German Parliament following reunification in 1989.

Drawing from the German experience, Thierse said truth-seeking about the past was an important way to achieve internal unity. â€œIf there has been so much hostility and so many victims, in such a situation it is better to seek the truth and find ways to compensate,â€ he said. Thierse, who is one of four German Vice Presidents of Parliament, arrived in Colombo on Saturday (6) for a visit that focused on inter-faith dialogue and reconciliation.