<![CDATA[Conveying his solidarity with students’ protests in Jaffna, Paul Murphy, MEP, in a statement demanded the immediate release of the arrested Tamil students and political prisoners. In a solidarity message sent to an emergency demonstration organized outside the Sri Lankan High Commission in London on Friday, Mr. Murphy said "I express my solidarity with the protest taking place against the arrest of Tamil students in Sri Lanka. I demand that the Sri Lankan government release all those arrested immediately. The arrest of these students under the Prevention of Terrorism Act just for participating in a peaceful protest shows the extent of how much the democratic rights are under attack in Sri Lanka. The Sri Lankan government must end this immediately and release all political prisoners.” “This repression also further exposes the false claim of the government that it is improving the conditions for the Tamil speaking people in Sri lanka. Students should be released without delay," Mr. Murphy’s statement further read. <a href="http://www.eelamenews.com/?attachment_id=106956" rel="attachment wp-att-106956"> 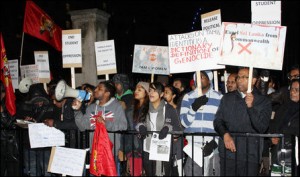 An emergency protest outside the Sri Lankan High Commission in London to demand the immediate release of Jaffna University Students was organized on Friday at less than 24 hours’ notice by Tamil Solidarity. The protest also saw the launch of “Release all the political prisoners in Lanka”. Besides Eezham Tamil activists, the protest saw the participation of representatives from a number of different civil society organisations in the UK. Socialist Students national organiser Claire Laker-Mansfield explained that students in the UK were shocked at the brutal treatment meted out to students in Jaffna after they tried to organise a memorial event to remember the people who lost their lives in the war. She said students in great numbers would protest the fact that students in Sri Lanka may be arrested and could be held for up to 18 months without charge, a huge transgression of democratic rights.  She further said that students would also take inspiration from the courage of students standing up to such a repressive government. 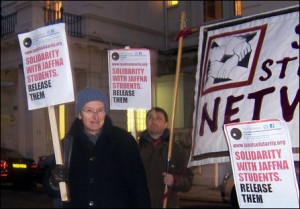 The organiser for Youth Fight for Jobs, Paul Calanan explained that young people and working class people would understand that this action by the Sri Lankan regime was nothing to do with protecting the safety of ordinary people in Sri Lanka. But it has everything to do with trying to stamp on every sign of protest. Rob Williams, national chair of the National Shop Stewards Network, was the next to speak. The Network organises trade unionists across the six million-strong TUC and Rob pledged to build solidarity and protest across it. He added that the links between Tory MPs, who are happy to accept hospitality from this regime with so much blood on its hands, would be exposed. Pete Dickenson, a member of the UCU university lecturers’ union pointed to the role of other brutal regimes such as that of China and explained that a united struggle of students and workers will be needed. Martin Powell-Davies, member of the national executive of the National Union of Teachers, has also given his support to this campaign. Sarah Sachs-Eldridge from Tamil Solidarity appealed to the gathered people and to the neighbours of the Sri Lankan embassy to join the growing protest movement against the regime that slaughtered over 100,000 in the final phase of the war alone in 2009. She also explained that to fight the dictatorial regime we could have no faith in the UN or the governments across the world that represents the super-rich 1% elite. She was of the opinion that inspiration should be sought from the masses that rose up in North Africa and the Middle East and in Europe and fight for the rights of the Tamil-speaking people and all oppressed. Earlier this, TYO-UK had organised a protest on Tuesday in 10 Downing Street, London, which saw the participation of activists from different university Tamil societies. Thusiyan Nandakumar from the TYO-UK said “We as a nation have a right to national remembrance. The harassment and aggression of our youth, is a continuation of a systematic genocide against our nation.” “Today, we have demonstrated that the Tamil nation continues to stand united. As they held protests in Jaffna, we the Tamil youth held protests worldwide in solidarity. Our nation is unbroken and continues to stand defiant in the face of genocide,” he added. (Tamilnet)]]>