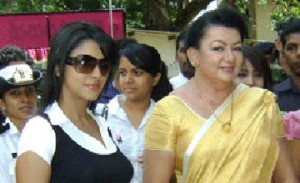 A youth who is alleged to haveÂ used the path of the Sri Lankan president’ wife Shiranthi Rajapaksa during her morning constitutional at Galle Face Green on Sunday was ordered to be remanded till August 3 by a Colombo Court yesterday.

The suspect Kasun Udara Sampath was arrested by the Fort police. They said the suspect, who had no documents to prove his identity was acting suspiciously and appeared to have been present at the spot with the intention of committing an offence.

Fort police informed court that when the Shiranthi was engaging in her customary constitutional at the Galle Face Green on Sunday the suspect had stood in front of her and refused to budge even after a PSD Inspector had asked him to move away.

The police told Colombo Fort Acting Magistrate Sampath Gamage that the suspect may have been suffering from a mental illness.