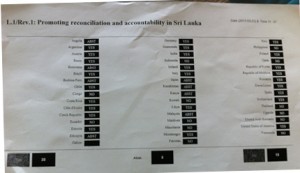 A YEAR ago, when I was living in Colombo, Sri Lanka, I arranged to meet a friend for lunch, to talk about a Sri Lankan journalist who had gone missing and was presumed dead. By the time we met, my friend had a new mission: to keep another Sri Lankan safe.

The previous day, the United Nations Human Rights Council had passed a resolution “noting with concern” the Sri Lankan government’s refusal to address serious allegations of human rights abuses by the military – carried out during and after its 26-year war with the separatist Tamil Tigers, which ended with a defeat of the rebel group in 2009.

A number of Sri Lankan activists had flown to Geneva to lobby for the resolution, to their government’s dismay. Commentators on state TV lambasted them as villains and traitors, and word reached several of the activists that they might not want to rush back home. So my friend and I spent that sticky afternoon trying to help one get to safety, assembling the papers she needed to apply for a visa to the United States, where she hoped to lie low for a while.

Yesterday, the Human Rights Council voted once again to urge the Sri Lankan government to investigate “alleged violations of human rights” – or what The New York Times called “polite diplomatic shorthand” for the growing evidence that government soldiers killed tens of thousands of civilians in their bloody campaign to crush the rebels. But as with last year’s resolution, this year’s Council vote offers little more than hand-wringing.

While they carry symbolic weight, such resolutions may, in fact, be impeding progress rather than facilitating it.

The government of President Mahinda Rajapaksa greeted last year’s vote with complaints that it was being persecuted by the international community – and used that as a pretext to obstruct even more thoroughly the work of journalists, lawyers and activists. As Mohan Peiris, a former attorney general who is now Sri Lanka’s chief justice, said last March: “It won’t change anything. We will just forge ahead as planned.”

In May 2009, the Tamil Tigers, a merciless guerrilla group, lost the fight to carve out a separate state for the island’s Tamil minority. The war ended in a blaze of blood, with roughly 40,000 Tamil civilians killed, according to a United Nations estimate.

Four years later, the government has not investigated numerous charges that the army committed atrocities during the waning years of the conflict. Straining the fragile peace yet more, Tamils in the country’s north and east continue to live under the close watch of the Sri Lankan military.

People are arbitrarily arrested or abducted – “disappeared,” to use what is now a common term. Security forces quell peaceful protests. Relatives of Tiger combatants who surrendered in 2009 are still petitioning, in vain, to find out where their loved ones are, or even to be told that they will not be coming back.

Human rights activists and journalists are continually harassed. In February, a group of men shot a reporter for The Sunday Leader, a newspaper frequently critical of the government.

The ability to conduct business as usual appears to have persuaded Sri Lanka that it need not worry about international opinion. Last year, the government campaigned vigorously to swing the Human Rights Council’s vote in its favor, dispatching diplomats around the world to make its case. This time around, Sri Lanka has been cool and dismissive, sending a relatively featherweight delegation to Geneva. “I think they know now that the vote doesn’t mean anything,” a human rights lawyer in Colombo told me recently.

For the resolution to mean anything, of course, large nations must back words with deeds, but this shows no signs of happening. India, the dominant power in South Asia, is content with the politest of raps on Sri Lanka’s knuckles, lest it alienate a close neighbor.

Britain voted for the resolution, but it still plans to convene a meeting of the heads of governments of Commonwealth nations in Colombo this November, instead of shifting the location as a symbolic protest, as rights activists have beseeched it to do.

In their collaborations with the Sri Lankan government, China and Japan also overlook its human rights record.

Only in the United States did a Congressional committee vote, in 2011, to ban nonhumanitarian aid to Sri Lanka – though even that move was possible only because, as a former American ambassador to Sri Lanka once put it, “the U. S. has no significant strategic interests in Sri Lanka.”

There was no doubt that the resolution in Geneva would pass, but this will only further demonstrate the impotence of lukewarm diplomacy. Only more principled action will force Sri Lanka to examine the horrors that took place on its northeastern beaches and the frightening abuses that have happened since.

Samanth Subramanian, the India correspondent for The National, is writing a book about the Sri Lankan civil war.