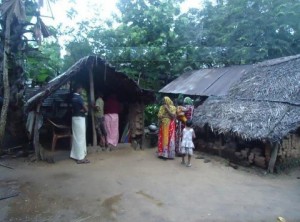 The mother of Sri Lankan housemaid Rizana Nafeek has refused to accept any money from Saudi Arabia or Saudi nationals, reports from Muttur said today. Saudi Arabia had offered to pay money to Rizana’s family after the maid had been executed in Saudi Arabia recently over the death of a Saudi baby in her care. However Rizana’s mother has said she will not accept any assistance from Saudi Arabia and does not want any of them coming to her house. Saudi Arabia on Sunday defended the execution of the maid for the death of an infant in her care and hit back at international criticism of last week’s beheading. “The Kingdom of Saudi Arabia categorically rejects any interference in its affairs or in the provisions of its judiciary under any justifications,” a statement carried by the official Saudi Press Agency read. Human rights groups and the Sri Lankan government had lobbied for leniency in the case of Rizana Nafeek, who was convicted of killing her employers’ son in 2005. The family said she strangled the boy, Kayed bin Nayef bin Jazyan al-Otaibi, after being asked to bottle-feed him, but Nafeek said the infant accidentally choked on milk.]]>