<![CDATA[The reputation of the US in Europe risks sinking back to Bush-era levels of unpopularity if Mitt Romney becomes president, according to new international polling published on Tuesday. <a href="http://www.eelamenews.com/?attachment_id=102833" rel="attachment wp-att-102833"> 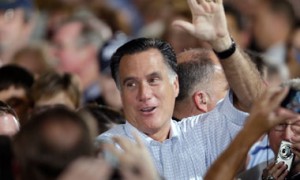 Only around one in 20 of those surveyed in Britain, France and Germany by YouGov held a positive view of the Republican presidential nominee. The poll of more than 12,000 people across Europe, the Middle East, North Africa, Pakistan and China was prepared for the YouGov-Cambridge forum this week at which the Guardian is a media partner. The results are a sign that affection for Barack Obama has diminished little since his 2008 speech in Berlin in which he promised to restore America’s reputation on the world stage, even though, four years on, GuantÃ¡namo remains open and the US is still engaged in military action in Afghanistan. But while Europeans had a strongly negative reaction to Romney, the prospect of him winning the White House was greeted with less dismay in Pakistan, where about 13% of respondents said it would make them more favourable to the US, compared to just 9% who said it would make them less favourable. This is possibly a reflection of the anger towards the Obama administration over drone attacks which have led to civilian deaths and are viewed as an infringement of Pakistani sovereignty. There was less antipathy, too, in the Middle East and north Africa, where onlyÂ  8% said they felt a Romney presidency would make them feel less favourable towards the US. Again, the reason for this may be more to do with negative feelings about the current administration, in particular its failure to mount a serious attempt to resolve the Israeli-Palestinian conflict, than warmth for Romney. But the most striking finding was the level of antipathy towards the Republican in Europe. Although he is still largely an unknown quantity outside the US, he alienated many during an ill-fated overseas trip in the summer, particularly in Britain, where he appeared to publicly criticise Olympic planning and the level of enthusiasm for the London games. Forty-seven percent of UK respondents said a Romney victory would make them feel less favourable towards the US, and only 3% would make them feel more favourable. That sentiment was mirrored in Germany and France, where only 4% and 5% respectively said that he would make them feel more favourable towards the US. In Germany, 48% said it would make them feel less favourable and in France 38%. It was not just in Britain that Romney’s overseas trip went down badly. French daily Le Figaro, normally staunch conservative, ran a blog with the headline: ‘Is Mitt Romney a loser?’ In Poland, he was criticised by the Solidarity movement for being anti-unions. A negative poll among Europeans can easily be brushed aside by the Romney campaign, as their views are unlikely to have any impact on the election. Indeed, he might even regard the results as helpful since many Americans, at least in public, claim to be disdainful about European views. One of George Bush‘s successes in the 2004 campaign was to portray his opponent, John Kerry, as being too French in his tastes and manners. There was also a backlash against France over its opposition towards the Iraq war. But the findings play into a larger question over Romney’s foreign policy credentials. Little is known about his position on these issues, mainly because he has had little to say, espousing only three positions: support for Israel in event of it bombing Iran; a threat to launch a trade war against China over alleged currency manipulation; and identifying Russia as America’s main threat. Romney’s 30-strong team of advisers includes a large number of neo-conservatives from the Bush era, such as former UN ambassador John Bolton, one of the most public advocates of bombing Iran. The Obama campaign team is seeking to exploit Romney’s vulnerability in this area. One of the strongest sections of Obama’s otherwise subdued speech to the Democratic convention last week was an attack on his opponent’s lack of foreign policy experience. On Monday, the Obama campaign fielded the former Nato supreme allied commander in Europe, General Wesley Clark, to criticise Romney for failing to include any mention of Afghanistan in his speech at the Republican convention in Tampa, Florida, a fortnight ago. The Romney campaign has judged that foreign affairs is not important in a campaign dominated by the country’s sluggish economy. But it will come up in at least one of the three presidential debates scheduled for next month. Between 10-25 August 2012, YouGov questioned 12,693 adults across the US, Britain, Europe, the Middle East & north Africa (Mena), Pakistan and China. Data was weighted to be nationally representative of adult populations in Britain, US, France, Germany and the US. Data in Mena, Pakistan and China is representative of the online population. (The Guardian)]]>