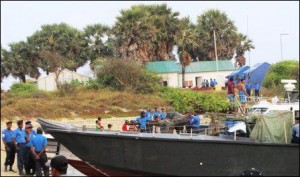 In a letter to Singh, Vaiko said there were reports that Chinese vessels and Chinese navy personnel in Sri Lankan vessels had been spotted in the Palk Strait that divides India and Sri Lanka.

This, he said, “poses an impending challenge to the sovereign rights of India”.

Terming the stationing of Sri Lankan battleships near Katchatheevu a trial balloon, Vaiko said: “The government should take up this serious issue with the Sri Lankan government and take appropriate steps so that the Sri Lankan naval vessels (are) withdrawn immediately.”

Political parties in Tamil Nadu have been pressing the Indian government to cancel a 1974 agreement under which New Delhi ceded the island to Colombo.

Vaiko said for years Tamil Nadu fishermen had been attacked and killed by the Sri Lankan Navy in the sea.

“So far, 578 Tamil Nadu fishermen have been mercilessly killed,” he said.

“In such a situation, battleships of the Sri Lankan Navy are stationed near Katchatheevu and their navy personnel have threatened the Tamil Nadu fishermen who had gone fishing (there),” Vaiko said.

Ever since the Tamil separatist conflict ended in Sri Lanka in 2009, clashes between the Tamil Nadu and Sri Lankan fishermen have risen as the latter have begun fishing in waters they stayed away from earlier. (IANS).