<![CDATA[An agitation was carried out by students of Ruhuna University protesting against the attack on a group of students by thugs nurtured by the Sri Lankan government on the 31st December and the 1st January and the failure of the university authorities or police to take action regarding the incident. <a href="http://www.eelamenews.com/?attachment_id=107965" rel="attachment wp-att-107965"> 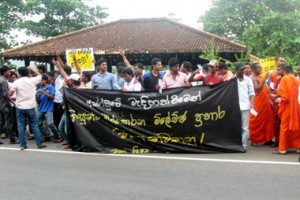