The UK, US and France rounded on Russia and China following the veto of a UN draft resolution on fresh Syrian sanctions, lambasting the move as “inexcusable” and accusing Moscow of buying time for Bashar al-Assad to “smash the opposition”. 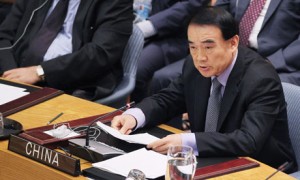 Both Russia and China have consistently resisted the security council’s attempts to introduce sanctions on Damascus, meaning their veto was no surprise, but the strength of the response from those in favour gave some indication of the frustrations behind the scenes.

Britain’s foreign secretary, William Hague, condemned the two countries vetoing the resolution as “inexcusable and indefensible”, adding that Russia and China had “turned their back on the people of Syria in their darkest hour”.

It was the third time Russia and China have used their vetoes over Syria. The resolution would have allowed sanctions to be imposed on the Assad regime under chapter 7 of the UN Charter.

The UK ambassador, Sir Mark Lyall Grant, was the first to respond to the vote at the UN in New York, telling council members that the UK “is appalled by the decision of Russia and China to veto this draft resolution”.

“Russia and China are failing in their responsibilities as permanent security council members,” Lyall Grant said, adding that the proposed resolution is supported by almost every group internationally.

Lyall Grant said the other UN Security Council nations had “offered flexibility on Russia and China’s concerns”, yet the countries “argued that a chapter 7 resolution is somehow designed to seek conflict through the backdoor”.

“This argument is irrational,” he added.

The French ambassador, GÃ©rard Araud, was even more critical, declaring that “‘history will prove [Russia and China] wrong, and it will judge them”.

“It is now clear that Russia merely wants to win time for the Syrian regime to smash the opposition,” he said.

Russia’s ambassador, Vitaly Churkin, fought back against the criticism, saying countries had “attempted to fan the flames of conflict within the UN Security Council”.

“The draft which was just voted on was biased. The threats of sanctions were levelled exclusively at the government of Syria. This runs counter to the spirit of the Geneva document and does not reflect the realities in the country today.”

China also believed the resolution to be “seriously problematic, with uneven content that is intended to put pressure on only one party”.

The country’s ambassador Li Baodong said countries had made “unfounded accusations against China”, adding that the resolution would “not only further aggravate the turmoil, but also result in spill over to other countries in the region”.

However Susan Rice, the US ambassador, said that the suggestion that the resolution would give the green light for foreign forces to enter Syria was “paranoid if not disingenuous”.

“It would in no way authorise or even pave the way for foreign military intervention,” Rice said. She said the resolution “would not even impose sanctions at these stage”.

“We have missed yet another critical opportunity to work together. We and the people of Syria cannot afford to miss any more,” she added.

“One can only hope that one day, before too many thousands more die, that Russia and China will stop protecting Assad and allow this council to play its proper role at the centre of the international response to the crisis in Syria.”