<![CDATA[Russia has threatened NATO with military strikes against in Poland and Romania if a missile defense radar and interceptors are deployed in Eastern Europe. <a href="http://www.eelamenews.com/?attachment_id=102408" rel="attachment wp-att-102408"> 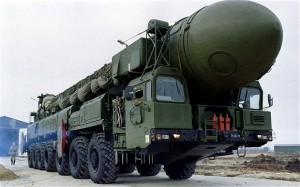 General Nikolai Makarov, Russia’s most senior military commander, warned NATO that if it proceeded with a controversial American missile defense system, force would be used against it. He said, â€œA decision to use destructive force pre-emotively will be taken if the situation worsens” Gen Makarov has threatened to target NATO bases hosting an anti-missile system designed by the US to protect European allies against attack from states such as Iran. He said that Russia would counter NATO deployment by stationing short-range Iskander missiles in the Russian Kaliningrad exclave near Poland, creating the worst military tensions since the Cold War. “The deployment of new strike weapons in Russia’s south and northwest â€“ including of Iskander systems in Kaliningrad â€“ is one of our possible options for destroying the system’s European infrastructure,” he said.]]>