<![CDATA[An erupting volcano in Russia's Far East has become a sightseeing hotspot for crowds of thrill-seeking tourists eager to see flows of lava and clouds of ash. Others, however, saw in the natural phenomenon an omen heralding the end of the world. <!--RTEditor:genereated-->Â­Plosky Tolbachik on Russiaâ€™s Kamchatka Peninsula, dormant since its most notable recent eruption in 1975, is spilling up to 1,200 metric tons of lava every second â€“ a record amount â€“ and spewing clouds of ash nearly 3,000 meters into the air, local seismologists estimated. 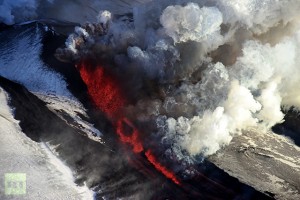 The road to the 3,085-meter Plosky Tolbachik runs through the frozen Studenka River. Despite the risky route, up to a hundred cars full of tourists brave the crossing every day to get to the nearby mountain. The tourists â€“ who ignore warning signs and the dangers of leaking lava, hot falling rocks and clouds of ash â€“ pay top prices and take a 10-hour car ride to see the volcano. The trip reportedly costs 20,000 rubles (about $650) for locals and close to $1000 for Moscow tourists, nearly equal to the average monthly wage in the capital. The inrush of tourists forced rescue teams to set up a camp at the foot of a hill from which people can take pictures. Some tourists approach the flows of lava close enough to risk melting their boots. Fossilized lava looks just like stone, but its internal temperature can reach up to 300 degrees Celsius. Though the volcano is 10 kilometers away from the tourist spot, the heat still reaches the area â€“ visitors could easily wear summer clothes. Other groups have organized outings with off-road vehicles delivering tourists to the base of fresh ash and rock deposits from the eruption. However, some did not appreciate the eruption, seeing it as an ill omen for the end of the world. There have been media reports suggesting that various apocalypses will begin with the eruption of different volcanoes around the world, including those on Kamchatka. Scientists have rejected such prognoses, saying that rumors about the huge volumes of lave and possibilities that it can annihilate mankind are exaggerated. “Typical, predictable and nowadays sufficiently studied activity of the most active volcanoes in Kamchatka â€“ Shiveluch,Â  Kluchevsky, Bezymyanny (‘Nameless’) and others â€“ does not exceed in their activity the peak of activity recorded in the past,â€ leading volcanologist and seismologist Aleksey Ozerov told RIA Novosti. Plosky Tolbachik has been erupting since November 27, sparking a forest fire and destroying buildings at two research bases located close to the mountain. Local residents have been warned not to leave their houses. In total, the volcano has erupted 10 times since records began in 1740, most dramatically in 1975 when the volume of lava and ashes became the largest in the recorded history of Kamchatka. (RT News)]]>