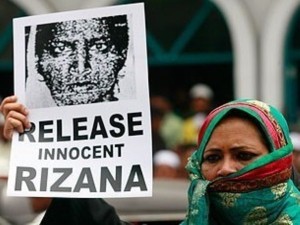 Saudi Arabia on Sunday defended its execution of a Sri Lankan maid for the death of an infant in her care and hit back at international criticism of last week’s beheading. “The Kingdom of Saudi Arabia categorically rejects any interference in its affairs or in the provisions of its judiciary under any justifications,” a statement carried by the official Saudi Press Agency read. Human rights groups and the Sri Lankan government had lobbied for leniency in the case of Rizana Nafeek, who was convicted of killing her employers’ son in 2005. The family said she strangled the boy, Kayed bin Nayef bin Jazyan al-Otaibi, after being asked to bottle-feed him, but Nafeek said the infant accidentally choked on milk. She was executed Wednesday amid condemnation by human rights groups, the European Union and the United Nations. But in Sunday’s statement, the Saudis said complaints about her execution “draw on false information about the case and are issued without full knowledge of the circumstances of the case itself.” The Saudi statement denied allegations by Nafeek’s advocates that she was a minor at the time of the boy’s death. Sri Lanka’s government said she was only 17 at the time. But the Saudi statement said her official passport showed she was 21 when the boy died. “As it is universally recognized, the passport is an official document issued by her government,” the statement said. “Moreover, the legal regulations of the Kingdom of Saudi Arabia do not allow the recruitment of minors.” Saudi Arabia is a signatory to the international Convention on the Rights of the Child, which bars the execution of offenders who were under 18 at the time of their crime. The Saudis said Nafeek had “all rights to have a legal defense,” with the Sri Lankan government monitoring the case. And it said Saudi officials “at the highest levels” urged the infant’s family members to agree to clemency or a payment of “blood money” in exchange for sparing Nafeek’s life, but they refused. Nafeek was put to death Wednesday in Dawadmi, a small, dusty town about 200 kilometers (125 miles) west of Riyadh. Sri Lanka has withdrawn its ambassador to Saudi Arabia in response to the execution, which Sri Lankan President Mahinda Rajapaksa had twice asked Saudi King Abdullah to stop. “We pointed out to Saudi officials that Rizana came to their country as a housemaid. She was not competent or trained to look after a baby, which she had been assigned to her by her employer,” External Affairs Secretary Karunatilaka Amunugama said in a statement released Friday. Human rights groups said Nafeek did not have access to a lawyer during her pretrial interrogation, during which she said she was assaulted and forced to sign a confession under duress. Philip Luther, director of Amnesty International’s Middle East and North Africa program, said last week that the case shows the Saudis are “woefully out of step … with their international obligations regarding the use of the death penalty.” U.N. Secretary-General Ban Ki-moon was “dismayed” by the execution, the United Nations said last week. Amnesty says Saudi Arabia executed at least 79 people in 2012. Of those, 27 were non-Saudis — and most of the foreigners executed in recent years were migrant workers from developing countries, the group said. (CNN)]]>