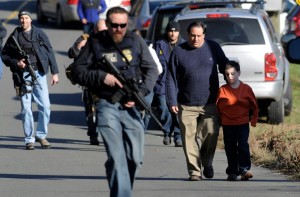 A lone gunman killed 26 people at an elementary school in Connecticut, including 18 children, in a terrifying early Friday morning shooting spree. The Associated Press and local media reported the shooter, an unidentified 20-year-old adult male, was also dead inside Sandy Hook Elementary School. A second person was in custody and undergoing questioning. Two handguns were recovered at the scene. Mayor Mark Boughton said several victims had been taken to local hospitals. Groups of students â€” some crying, some holding hands â€” were escorted from the school by teachers. Some witnesses reported of up to 100 shots. There were unconfirmed reports that the assailant, dressed in military style assault gear, shot most of the victims in a kindergarten classroom. State Police Lt. Paul Vance would not confirm the number of fatalities and shooting victims until relatives had been notified. The incident â€“ which would be one of the worst school shootings in U.S. history â€“ is the latest in a series mass shootings in the U.S. this year, including Tuesdayâ€™s assault by a lone gunman at a Portland, OR., shopping mall that left two dead and one wounded. White House spokesman Jay Carney said Homeland Security adviser John Brennan informed President Obama of the shooting at 10:30 a.m. â€œThe president is receiving regular updates as more information becomes available,â€ Carney said. Carney said Obama would comment when more details were known. Sandy Hook is in a residential, wooded neighborhood about 60 miles northeast of New York City. It has has 39 teachers and about 650 students. A reverse 911 call went out to parents warning of an incident. Parents were being reunited with children. But, NBC Connecticut reported, police were searching the area behind the school with guns drawn. Terese Lestik was relieved to find her five year old daughter, Eva, unharmed. â€œI heard a boom-boom,â€ Eva said of the gunshots she heard earlier. â€œIâ€™m horrified,â€ said Terese Lestik. â€œI just pray for whoever is hurt.â€ Alexis Wasik, a third-grader at the school, said police were checking everybody inside the school before they were escorted to the firehouse. She said she heard shots and saw her former nursery school teacher being taken out of the building on a stretcher, but didnâ€™t know if the woman had been shot. â€œWe had to walk with a partner,â€ said Wasik, 8. One child leaving the school said that there was shattered glass everywhere. A police officer ran into the classroom and told them to run outside and keep going until the reach the firehouse, The Hartford Courant reported. (USA Today)]]>