Scotland Yard was today monitoring a protest by Tamil activists close to the Olympic park where a demonstrator is staging a hunger strike, the London Evening Standard 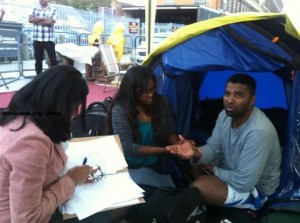 Gobi Sivanthan, 32, has a tent in Burford Road near the Olympic stadium and has refused food for nine days. He plans to fast until the Olympics are over in protest against Sri Lanka’s participation, claiming the country should be banned for war crimes against Tamils in its long civil war.

About 200 Tamils were dispersed after trying to gather close to the park on hearing rumours that the Sri Lankan president was there.

Mr Sivanthan, from Hayes, a father of two, said: “Nearly 150,000 Tamils were unaccounted for in Sri Lanka in 2009 and many thousands have been killed. Sri Lanka should be tried for war crimes. I believe Sri Lanka should not be allowed to compete at the London Olympics.”