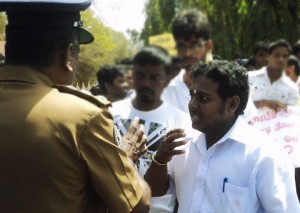 The Secretary of the Students’ Union of Jaffna University P.Tharshananth aged 24 years has been arrested by occupying Sri Lankan military  from his residence. Mr. Tharshanath’s mother had complained the incident. She had said four people in civilian clothes had come to their residence at 1.00 a.m. and saying they were taking her son to Kopay Police station had taken him away amidst her protests in a vehicle parked near their residence. Deputy Vice Chancellor of Jaffna University Siriyar Velnambi has informed that two students from the Jaffna University have been taken for police investigations. Meanwhile, the four Jaffna University Students arrested two days ago are in the custody of the TID in Vavuniya, according to Sri Lankan DIG Wagista. The police official has made the revelation in response to an inquiry by MP Ajith Kumara. The parliamentarian has inquired as to why those undergraduates had not been produced before a magistrate even 24 hours had elapsed since their arrest. The DIG has said that they could be kept in detention for 72 hours, since they had been taken under the Prevention of Terrorism Act. Relatives of the students had not been informed of their whereabouts until this revelation by DIG Wagista. Of them, Dharshananath and Solomon had led the protest at the university on November 28.  ]]>