Britainâ€™s nuclear industry is again the center of controversy. The UK has the biggest stockpile of Plutonium in the world, but there are no definite plans for how to get rid of it â€“ and the delays are costing the UK taxpayer billions.

Â­A record number of radioactive particles have been found on beaches near the Sellafield nuclear plant, in North West England. The authorities who run it admit itâ€™s the most radioactive place in Western Europe but insist itâ€™s safe. 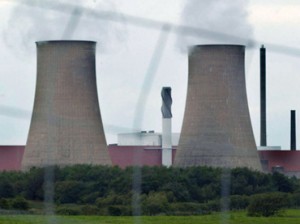 Sellafield is where all storage of radioactive materials and nuclear reprocessing in the UK takes place. It was once at the heart of plutonium manufacturing for the British atomic weapons program.

Despite the controversy that surrounds the plant, there are plans to build new reactors at Sellafield. The government has approved initial plans to build a fast PRISM reactor on the site. Most locals are against it. They want the UK government to commission a safety study into Sellafieldâ€™s effects on the health of the local population.

Janine Allis-Smith has a lot of experience of dealing with the fallout from Sellafield.Â  She is a senior campaigner from Cumbrians Opposed to a Radioactive Environment (CORE) and lives only a few miles from the plant. Her son was diagnosed with Leukaemia and she blames Sellafield.

She told RT, â€œKids play on the beaches, they get sand in their clothes.â€ This sand, she explains, could contain dangerous radioactive particles released from the nuclear complex and â€œParents have a right to know the risksâ€.

Anti-nuclear campaigners are demanding the beaches be closed or at least signs put up warning the public of the potential danger.

Sellafield has been monitoring a number of beaches near the plant since 2006, when it was ordered to do so by the UK governmentâ€™s Environment Agency after the discovery of a highly radioactive particles.Â  Between 2010 and 2011, 383 radioactive particles were found and removed.

However, locals claim they are not sufficiently informed about the pollution at the site. Allis-Smith explained that they are fulfilling the legal minimum requirement, so that although information is available, no-one knows about it. The local council has refused to become involved.

A study in the 1980â€™s found that over ten times the national average of childhood Leukaemiaâ€™s occurred near Sellafield. Thirty families tried to take the company who then ran the site to court and lost.

â€œThere has never been a proper investigation into the environmental impact of the plant and there should be.â€ Allis-Smith said.

It is not surprising that people like Allis-Smith are worried. Behind the razor wire, security guards and public relations campaigns, Sellafield is home to some of the most radioactive buildings in Europe.

The UK has the largest stockpile of Plutonium anywhere in the world and itâ€™s all stored at Sellafield. Plutonium is used for the manufacture of nuclear weapons and is extremely radioactive with a half-life of 25,000 years.

According to Francis Livons, research director of the Dalton Nuclear Institute in Manchester, this 113 tonne Plutonium mountain is the historical consequence of the British nuclear weapons programme in the 1950â€™s and 60â€™s and of over 60 years of reprocessing nuclear fuel. Since the late 1980â€™s the plant has been plagued by technical failures and, according to Livons, and a lack of political will to invest in new technology that works. He also said a vast amount of other nuclear waste stored at Sellafield â€œis not in a good state at-all.â€

It is the task of the Nuclear Decommissioning Authority (NDA) to clean all this up. The plans are to pay the French company Areva, who have proved their technology works, to build a new mixed oxide fuel (MOX) plant.

The other option is to let the US-Japanese GE-Hitachi build a new fast PRISM reactor on the site to burn the plutonium and produce electricity. This is a more elegant engineering option but the reactor is totally unproven and is decades away from completion.

The GE-Hitachi plans have been met with dismay by many locals, despite the prospects of large scale job creation in the area. Martin Fullwood, campaign co-ordinator at CORE has branded the proposals â€œabsolute nonsenseâ€.

Livons admits that the fast reactor plans are extremely ambitious, given that this type of reactor has never been built anywhere in the world before.

Fullwood says Sellfield is â€œA can of wormsâ€ and believes â€œThe NDA are clutching at strawsâ€. However, he concedes that something must be done about the nuclear waste. But Livons says â€œThe NDA is finally beginning to get to grips with what is a really nasty problem that lots of governments have tried to run away from. Things are finally starting to happen.â€

Sellafield is a legacy of cold war decision making and will remain a problem for decades, and will cost the UK taxpayer tens of billions of pounds to clear up. The British public are worried new reactors built in the UK will also be mismanaged. The government and scientists maintain that modern nuclear power stations are much cleaner and more efficient than the old ones.

If new nuclear does go ahead in the UK then the technology will be French, Japanese or American. Britainâ€™s post war dreams of being a world leader in nuclear energy lie in radioactive ruins in Sellafield.

Douglas Parr, the head scientist at Greenpeace, told RT, â€œSellafield is a monument to the huge failings of the British nuclear industry.â€ (RT News).