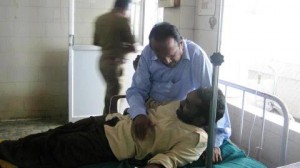 Senthuran, the Tamil man and inmate of the Poonamallee Special Refugee Camp who had been fasting for the past 27 days seeking the closure of special camps in the State, was arrested on Friday night after he fell unconscious. He also reportedly gave up his fast following assurances from the State government. Sources said he was produced before a Magistrate in Poonamallee who remanded him to judicial custody. Senthuran began his fast on August 6 after he was shifted to the Poonamallee Camp from Chengalpattu. For the past 13 days, he even shunned water. Around 4.30 pm on Friday, Senthuran fainted and was then carried to the room of a camp official. Around 6.30 pm, an 108 ambulance came into the campus and gave first aid to Senthuran. â€œOther inmates in the camp insisted that Senthuran be rushed to the hospital since he fell unconscious. The officials kept assuring that they will send him to the hospital, but they did not do so,â€ one of the inmates told Express. Soon, news spread that Senthuran would be admitted to the Government Royapettah Hospital. On hearing this, MDMK chief Vaiko and film director Pugazhendhi Thangaraj waited for Senthuranâ€™s arrival at the hospital from 10 pm, even as the news of the vehicle leaving the Special Camp was relayed to them. Around midnight, news of Senthuran being lodged in Puzhal Prison after being remanded by a Magistrate was received. Senthooran Ends Fast, Supporters Surprised Senthuran reportedly withdrew his indefinite fast here on Saturday following certain assurances made by the State government officials, sources said. His hunger strike had found the support of Eelam supporters and Tamil groups, especially after the death of his aunt Kamaladevi, who was on her way to visit him from Sri Lanka. Several street protests and relay fasts were held by the groups. According to Pugazhendhi Thangaraj, â€œNo doctors attended to him. Around midnight, police took Senthooran to the Puzhal prison. A suicide attempt case was filed on him.â€ He said, â€œThere was news that Senthuran has been brought to the Government Royapettah Hospital on Friday night. But it was a blatant lie. He was taken to the Puzhal Prison straight away. Senthuran went even without water for several days and developed fits. Is it not more important to hospitalise him than throw him into prison by filing a case against him?â€ Following his late night arrest, Marumalarchi Dravida Munnetra Kazhagam chief Vaiko, in a statement, said that his party would also end their relay hunger strike since Senthuran had ended his fast. He also said that the agitation planned on September 3 was withdrawn. (Express)  ]]>