The Serbian president has claimed Serbs in Kosovo are living under the threat of genocide and would not rule out a partition between ethnic Serb and Albanian regions of the former province. 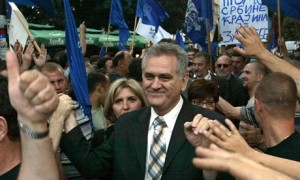 Tomislav Nikolic, a former ultra-nationalist, was elected in May on a more moderate platform. But in a Guardian interview he criticised Kosovo, whose independence Serbia and its allies refuse to recognise.

He signalled his intention to take a tougher stance than his predecessor in EU-brokered negotiations, arguing that until now only Serbia had been asked to make concessions in efforts to defuse the dispute and it would now demand more concessions from Pristina.

A Serb enclave around the northern half of the divided city of Mitrovica refuses to accept rule from the ethnic Albanian government in Pristina, the focus of tension since Kosovo declared its independence in 2008.

Its independence has been recognised by the UK, the US and most western states, but not by Russia, China and a majority of the UN general assembly.

Kosovo’s leadership has repeatedly called for the international community to help it extend its authority into the Mitrovica enclave and has been increasingly assertive in its efforts to force the issue.

Nikolic said any attempt to impose Pristina’s rule could lead to a Serb exodus. “What if the Serbs move out. Who will accept the results of such genocide? That is one of the definitions of genocide: when you expel 40,000 people, regardless of whether they are women, men, [civilians or] soldiers, and when you change the ethnic composition of the territory. That is genocide.

“There is a danger that Pristina would be prepared to go that far. The only armed force there, apart from the international community, is Albanian. I am convinced they wouldn’t mind doing that immediately.” He added that the only thing preventing such action was the presence of Nato troops.

Nikolic underlined an earlier declaration that he would never exercise power in Pristina, and called on his Kosovan counterpart, Atifete Jahjaga, to admit she would never govern in northern Mitrovica. Asked whether that implied the partition of Kosovo, he replied: “I don’t know, because if you told me 20 years ago there would be no Yugoslavia, I wouldn’t have believed you. If you told me Serbia and Montenegro would split, I would have also told you that was impossible. I would also have said that Germany would never reunite, but life brings us surprises. I can’t run policy by imagining things.”

During the wars that split Yugoslavia in the 1990s, Nikolic was a senior member of the Serbian Radical party. Its leader, Vojislav Seselj, is currently on trial at The Hague facing charges of crimes against humanity for atrocities carried out by the White Eagles paramilitary group under his command. According to Serbian political observers, Nikolic took no direct part in the paramilitary wing; however, he staunchly defended it in the Guardian interview.

“I have committed no crime. And I am not ashamed of anything I have done since 1990 to today … These so-called paramilitary units were in line with the then constitution of Yugoslavia,” he said. “In that time, I was aware that everybody must do everything he can to defend his people and country … All peoples from the former Yugoslav took part in the war. Some of them to gain states; the Serbs to save a state. But the Serbs did not manage to accomplish their task.”

Nikolic claimed the fact that the Serbs lost the war explained why there were more Serbs than other ethnicities facing charges at the war crimes tribunal, and not that it was Serbs under Slobodan Milosevic who committed the majority of atrocities.

“There are fewer members of other nations and their sentences are somewhat milder. So the Serb people tend to believe that justice is not equal for everyone. But we have accepted the jurisdiction of the Hague tribunal and we therefore accept its judgments,” Nikolic said, adding that the perception of bias left a “bitter taste”.

He refused to confirm whether he would have handed over senior Serb war crimes suspects such as Radovan Karadzic or Ratko Mladic to The Hague as his predecessor in the presidency, Boris Tadic, had done.

Nikolic also repeated his denial that the mass killings of Muslims from the Bosnian town of Srebrenica in July 1995 constituted genocide: “I cannot go further than the Serbian parliament,” he said. In March 2010, the parliament issued an apology for the massacre that did not explicitly use the word genocide but recognised declaration by the the international court of justice which defined it as such.

Last week the Serbian parliament approved the appointment as prime minister of Ivica Dacic, a former spokesman for the Milosevic regime. The ascent of Nikolic and Dacic has raised fears in the west and in Kosovo of a resurgence of militant Serb nationalism.

Hashim Thaci, Kosovo’s prime minister told the Guardian on Sunday: “The legacy that the current Serbia’s leadership has, is the one that really does not promise much. However, this came as a result of a democratic process that took place in Serbia and the will of people out there should be respected. I have no intention to judge the current leadership of Serbia based on the deeds they did on the past, I will judge them based on the deeds they will do now and on and particular in relationship to Kosovo.”

Thaci rejected Nikolic’s claims the Serbs of Mitrovica would be endangered by Pristina’s rule. “One should not forget this fact because two-thirds of the Serbs live in the southern part of Kosovo and are fully integrated and in charge of the self governance on the local level and participate in all institutions on the central level,” he said.

Nikolic said his greatest challenge was to fill the estimated $3bn (£2bn) hole in the budget. He asked for international assistance and claimed his country’s needs were small in comparison with the scale of the eurozone crisis, but warned creditors against making their help conditional on Serbia making concessions over Kosovo.

“Maybe someone thought we were ready to make various concessions if we were poor. But we expect the international community and our friends to help us to recover the economy in line with their duties and obligations,” he said. “We don’t want be treated like country cousins.” (The Guardian).