<![CDATA[A British website offered young women â€˜sponsorshipâ€™ from strangers in exchange for private encounters. Allegedly a pretty student could cover up to US$24,000 a year of tuition fees depending on â€˜the level of intimacyâ€™ she was willing to demonstrate. <!--RTEditor:genereated-->Â­The dubious business was exposed by The Independent newspaper, which sent an undercover journalist to pose as a potential scholar for a meeting with a site staffer, but cut it short when he requested a â€œpractical assessmentâ€ at a nearby flat. The website SponsorAScholar.co.uk apparently operates in a grey zone of British law, which allows clients and sex workers to be brought together, as long as any intermediary can plausibly deny involvement in sex for money deals, the newspaper said. It this particular case the website offered women between 17 and 24 funding for their university study from wealthy businessmen seeking â€œdiscreet adventuresâ€. The tuition money would be received in exchange for two-hour sessions with men in hotel rooms or private flats up to four times per term. The site claims to have undertaken such arrangements for 1,400 students. According to the conversation the reporter secretly filmed while meeting the â€œassessorâ€, the women are supposed to complete a questionnaire to describe what they are comfortable doing with the strangers. He explained that â€œthe more youâ€™re prepared to do, the more interest youâ€™re going to get, [and] obviously the more sponsorship amount youâ€™re going to get for that.â€ The sponsors use the websiteâ€™s database to choose a student they want to â€˜sponsorâ€™, and a meeting is arranged. As a side benefit, they enjoy a tax deduction for the â€˜scholarshipâ€™. The website claims to charge an access fee of about $160 and extra 3 per cent commission of the scholarship money. The Independent could not verify this because a male reporter who posed as a potential sponsor was put â€œon a wait listâ€, unlike his female colleague, who was offered an interview immediately. The meeting happened at a London fast food venue, but the man offered to go to a nearby apartment. There the reporter would be shown evidence that the scholarships had been awarded and fill in the questionnaire. She would also have to demonstrate to him â€œthe level of intimacyâ€ she would be prepared to give as part of â€œquality controlâ€. The meeting did not proceed. 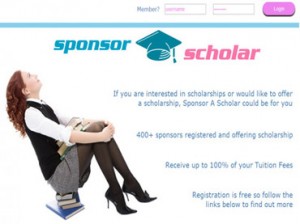 The website uses a false company and VAT identification number belonging to a legitimate dating website. When asked, the company told the newspaper that it was in the process of contacting SponsorAScholar.co.uk and legally demanding that all references to it be removed. The â€œassessorâ€ used the name of a senior academic from a leading British university. The website is also registered to a former address of this person. Once approached, the academic told the newspaper he had no link to the website. He did not recognize the man in the undercover footage. Later he said he had contacted the police to report the matter. The website has since gone down, saying it is undergoing maintenance. Rachel Griffin, director of the Suzy Lamplugh Trust, which promotes personal safety, told the newspaper: â€œMeeting a complete stranger in private could be highly dangerous at any time, but when it is in connection with a scheme like this, the risks are sky-high.â€ The National Union of Students accused those behind the website of seeking to â€œcapitalize on the poverty and financial hardship of women students.â€ (RT News)]]>