<![CDATA[The Kalai Kaviri College of Fine Arts in Trichy has had to pay a heavy price for hosting Sri Lankan Sinhala students at its premises. Volunteers of Naam Thamizhar stormed the institution accusing them of harbouring Sri Lankan nationals and conducting cultural programmes with the latter. As soon as the news that about 70 A-level (equivalent to Plus Two) students of Sri Lanka had landed in the college broke out, Naam Thamizhar volunteers staged a dharna in front the college demanding cancellation of all programmes involving the Lankans with immediate effect. <a href="http://www.eelamenews.com/?attachment_id=102152" rel="attachment wp-att-102152"> 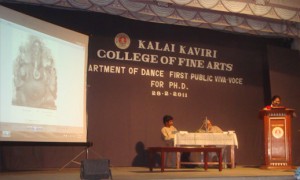 A police team led by assistant commissioner Gandhi visited the college after getting wind of the protest, and stopped a cultural programme that was scheduled at 2 pm. Both the Sri Lankan students and the college management paid a heavy price for not taking into consideration the ground realities existing in Tamil Nadu, and the strong anti-Sri Lankan sentiment blowing in the southern parts of the state. In fact, it was the last aided college started in the state in August 1996 with recognition of the Government of Tamil Nadu for teaching South Indian classical music and dance. The college belongs to the Catholic Diocese of Trichy, and it was here that the late poet Kannadasan translated the Bible into poetic verses in Tamil titled â€œYesu Kaviyamâ€. 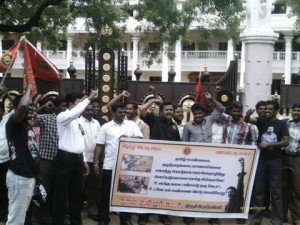 Gandhi blasted the college principal saying, â€œFor you, it is merely a dance and song programme, but for us it is a perennial political headacheâ€. The principal later told TOI that she was never exposed to such harsh language before, and had to pay a huge price for something that was not her fault. However, she admitted that she was naive enough not to have known the implications of allowing Sri Lankan students at this juncture. (TOI)]]>