Providing details of private and public lands being appropriated by the SL military in Mannaar district, Tamil activists, who came together for a protest on Saturday said, the militarisation seriously affects the lives of people of Mannaar. Tamil civilians, who are denied resettlement in Channaar in Maanthai West, where the occupying Sri Lankan military has appropriated 3,500 acres of lands, were the majority of the participants in the protest. 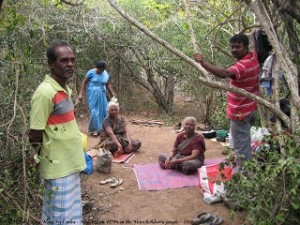 Mannaar Bishop Rt. Rev. Dr. Rayappu Joseph, together with Catholic priests and other civil activists from Mannaar, took part in the protest, which was organised by the youth activists of Ilangkai Thamizh Arasuk Kadchi (ITAK). The protest was supported by the other parties in the TNA, the parties outside the alliance, and by the elected representatives of the civic bodies in Mannaar as well as the Democratic People Front from South.

Apart from 3,500 acres of land appropriation in Channaar for a training base, 272 acres of lands were being appropriated in Tha’l’laadi for the construction of air base and 150 acres have been recently appropriated in the name of bird sanctuary in Vangkaalai – Naakathaazhvu. The activists listed at least 69 different locations where SL military-led land grab was taking place.

Around six hundred people participated in the demonstration, which began at 10:00 a.m. and concluded at 01:00 p.m. The demonstrators, who gathered at the premises of the Children’s Park in Mannaar city, were holding placards against land appropriation by the occupying SLA and were shouting slogans demanding that the SL military should withdraw from their lands enabling them to resettle.

TNA politicians and activists vowed to step up the pressure on Colombo. Convening a conference of all political and civil activists in the Tamil homeland as well as the solidarity forces in the South would be the next move in evolving the protests further, the TNA parliamentarians said.

The Sri Lankan military should be withdrawn to their barracks and the people must be allowed to settle freely in their places back with all their rights, civil activists, who took part in the protest told media, providing details of Colombo’s militarisation of Mannaar district.

The civil activists, extending support to ITAK organised protest also passed a strong message to the TNA hierarchy to be aware of the dangerous trend of compromising the fundamentals of the Tamil cause by getting waylaid to take part in what the establishments in New Delhi and Washington propose.

They cited the examples of compromising the call for investigations on war crimes, crimes against humanity and genocide by backing the US-tabled resolution that upheld Colombo’s LLRC without any reference to the UN report. The TNA first opposed the LLRC. But, later ended up supporting the US resolution as advised by the West, they said.

â€œNow, Indians are pushing the TNA to take part in Rajapaksa’s Parliamentary Select Committee to buy time to checkmate even the follow-up actions on the UNHRC resolutionâ€, a civil activist told TamilNet adding that the message from the civil society to the TNA hierarchy was to be firm in principles.

TNA parliamentarians Mavai Senathirajah, MA Sumanthiran, Selvam Adaikkalanathan, Sivasakthi Ananthan, Vino Nokarathalingam, E Saravanapavan and A. Vinayagamoorthy and former parliamentarians MK Sivajilingam of TNA and V. Anandasangaree of TULF took part in the protest. Councilor S. Bhaskara of the Democratic Peoples Front (DPF) led by Mano Ganesan, also took part in the protest organised under the leadership of VS. Sivakaran, the secretary of youth affairs of the ITAK. The Tamil National Peoples Front (TNPF) also had extended its support to the protest in Mannaar.
For more phots pl visit: TN