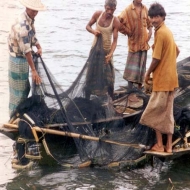 Tamil Nadu government yesterday told the Madurai Bench of the Madras High Court that there had been 167 incidents of attacks on state fishermen by Sri Lankan navy from 1991 to 2011 and cases had also been registered. Making the submission, Advocate General Navaneethakrishnan said there had been incidents of attack on Indian fishermen in Indian waters. The government said 85 fishermen died and 180 were injured in the attacks by Lankan navymen. Responding to writ petitions seeking proper security for fishemen operating in the Palk bay and the Gulf of Mannar, the government also said of the 746 fishermen apprehended by Lankan navy, 741 were repatriated, The bench was also hearing contempt petitions against the Coast Guard and Navy for not providing sufficient security to the fishermen as per the court order, leading to the incidents of attacks after the court order. The state government also submitted it was the duty of the Coast Guard to give protection to Tamil Nadu fishermen and their properties in Indian waters. They should liaise with Lankan navy to ensure protection. The question of deploying vessels near the International Maritime Boundary line was the responsibility of the central government. The state government said though the central government had taken the stand that Katchatheevu, an islet ceded to Sri Lanka under an agreement, was and is an integral part of Sri Lanka, and traditional rights referred to in Art 16 of the 1974 pact did not include fishing rights, Tamil Nadu government said it did not think so and opposed that stand. The state government said it had been constantly reiterating that the traditional fishing rights of the state fishermen should be restored. (PTI).]]>