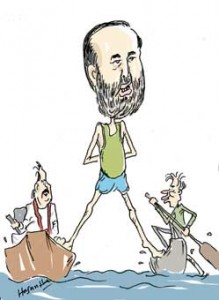 The Sri Lanka Muslim Congress (SLMC) is facing a split over the party’s decision to contest under the ruling Sri Lankan government ticket after some party heavyweights walked out in protest during a decision making meeting held on Friday (July 13), party sources said.

Party leader Rauf Hakeem announced at the meeting that SLMC would contest at all three provincial councils, including the all important Eastern Province under the UPFA ticket.

“Subsequent to this decision, some party heavy weights walked out of the meeting,” said the source.

Party sources said that Muslim community leaders had asked the SLMC to demand a set of guarantees from the government for the Muslims in the country if the SLMC is to contest under the UPFA ticket.

“But the SL president has turned down some of those demands, citing that the ruling party’s ally the Jathika Hela Urumaya (JHU) would oppose those demands,” the source added.

This prompted the Muslim community leaders to call for a common alliance of Muslim political parties, but Rauff Hakeen went back on this promise after the meeting with the president,” he added. This prompted the walkout by a number of party heavyweights.