<![CDATA[In their first interview since moving out of Sri Lanka in 2008, the former Sri Lanka Monitoring Mission (SLMM) has admitted the 2002 ceasefire agreement was flawed. <a href="http://www.eelamenews.com/?attachment_id=108306" rel="attachment wp-att-108306"> 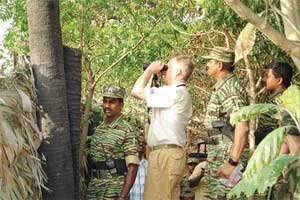 In an interview with The Sunday Leader newspaper, former SLMM spokeswoman Helen Ólafsdóttir says the CFA had some structural flaws and was never actually fully implemented, which gave scope for further conflict. The SLMM was criticized by hard-line political parties and groups in Sri Lanka and their role raised more questions than answers. However the SLMM has now hit out at its critics saying some of the monitors of the ceasefire between the government and the LTTE struggled mentally when they returned back to their home countries because of what they saw during the war. The SLMM was established on 22 February 2002 under the terms of a ceasefire agreement signed by the Government and the LTTE, as a body that would monitor the ceasefire. Brigadier (retired) Hagrup Haukland, who served as the SLMM’s third head of mission, first acting during an intermediate period between 2003– 2004 and then appointed and served again from 2005 to 2006 told The Sunday Leader that the SLMM never got access to the LTTE air strip. “We never got any access to their air runway. Never, ever! We were quite in a very bad situation regarding the LTTE air strip,” he said. Haukland a;sp admits that S.P Thamilchelvan was meanwhile the man who could provide the solution for any issue and so the SLMM was prepared to deal with him. “We never sat close to the chief (Mr. Prabhakaran). His spokesperson and the person we operated through was his political advisor Mr Thamilchelvan. When things went wrong we had to take this up with him. We knew very well that to get a solution to we had to deal with Thamilchelvan. He was slippery but we did notice that pretty early,” he said.

Thamilchelvan was killed in an air strike by the military in November 2007. Air Force jets pounded the bunker he was believed to have been hiding at the time. Ólafsdóttir says the SLMM could not offer solutions and instead just worked according to an “outdated mandate” and so in the end everyone was tired, exhausted mentally and disappointed. “The SLMM Monitors were exposed to a lot horrible things and I know for a fact that some of my colleagues struggled mentally when they returned back to their home countries because of what they saw. Slam the SLMM all you want, but the people working for the SLMM, who came from various different backgrounds, were faced with gruesome images of bombsites and killings, looking at bodies of children and in some cases had people screaming for help that were later killed and yet we could do so little. I think at the outset we saved a few lives from interventions, even though our mandate was not to intervene, but it started getting worse and worse after 2004. We were in fact rather helpless,” she said. Ólafsdóttir told The Sunday Leader that the CFA was never meant to be a long term solution and could never serve as such. “It thus became very difficult for us to carry out this work in the long run. The agreement also had, one might say, some structural flaws and the agreement was never actually fully implemented which gave scope for further conflict. For example demarcation was never really implemented which left some areas more prone to conflict. The SLMM had to treat the two Parties on equal footing according to the agreement, even though legally one party was a democratically elected sovereign government and the other an organisation which was on the terrorist list of other countries,” she said. She also said that the SLMM tried as best as they could to be neutral, and treat both sides equal, according to its mandate, but this resulted in the end in unpopularity with the people in the South. “The biggest failure of the peace process was probably the inability to engage the LTTE in a formal political process. There was also no real plan or willingness for that matter on the LTTE side to engage in a disarmament process because of deep rooted suspicion of the Government. It is a real shame because personally I fundamentally believe we had an opportunity to save thousands of lives in Sri Lanka but the window of opportunity only really lasted for a year or so and after that, especially when the LTTE walked out of peace negotiations the situation started deteriorating,” she said. She also said that the split of the LTTE was probably also the most defining issue in terms of the demise of the LTTE but likewise it was impossible for the SLMM to operate in the East from then on. “We were not equipped to deal with this split and whatever underlying collaborations were going on it was simply above our heads to address this. We became pawns and we were often used politically and mislead by both sides. It was tough to stay positive because after all, we were there, a group of Nordic Citizens, with our hearts in the right place, mandated to monitor a Ceasefire that did in fact no longer exist,” she said.]]>