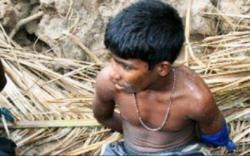 Launched at the sidelines of the Asia Pacific Regional Internet Governance Forum, a multi-stakeholder meeting that involves governments, the private sector, as well as civil society across the region on issues relating to the Internet, the new publication illustrates current and emerging trends regarding the issue of freedom of expression on the Internet and social media in Asia through various case studies, and analyses legislations and policies across the region.
The publication describes the situation of freedom of expression on the Internet and social media in Asia as thus: “Voices of dissent emerging from these new spaces created by advancements on the Internet have often been met with harsh crackdown by governments. Those who express views that are contrary to dominant cultural and religious norms are particularly targeted – not only by governments but by non-state actors as well. The Internet and social media have thus become battlegrounds between those claiming and utilising the new space for free speech and expressions, and those who seek to close this space.”
Indeed, one of the main trends identified in the publication is the heightened measures to censor, block or filter out online contents during specific key political events. The publication provides several examples of this, including in Sri Lanka, where several websites were blocked on the eve of the presidential election in 2010; and in Malaysia, where severe disruptions of cellular communications were reported during a mass-scale rally demanding for free and fair elections in April 2012.
According to Yap Swee Seng, FORUM-ASIA’s executive director, “This particular trend of censoring and blocking online contents during key political events is expected to worsen considering the rise of popular movements that are critical of governments in many countries across Asia, coupled with several scheduled elections across the region in the next couple of years.”
Furthermore, most of these restrictive measures are implemented by governments in a non-transparent manner.
“The non-transparent manner of governments’ measures to restrict online contents makes it extremely difficult to determine whether these measures taken are indeed legitimate, necessary and proportionate under international human rights law,” said Yap.
The publication also highlights the increase of law amendments and new laws by governments in the region to further restrict freedom of expression on grounds of national security, cyber security, defamation and incitement to hatred. Yap said that while these laws at first glance may seem justifiable, they are often vaguely worded and overbroad, and easily open to abuse to criminalise free speech online.
Other trends noted in the publication are:
Yap stressed, “Non-state actors, such as corporations and Internet service providers, are increasingly being pressured by governments to play an increased regulating role as intermediaries. Several countries in Asia have held intermediaries liable for online contents, thus forcing them to block or remove certain contents that are deemed ‘undesirable’. This is indeed a very worrying development for freedom of expression online.”
Based on these trends, FORUM-ASIA called on governments, the private sector, and judicial bodies in the region to respect, promote and protect freedom of expression and other rights in accordance to international human rights laws and standards at all times. This includes:
The findings of this publication, together with its recommendations, will be presented at the Asia Pacific Regional Internet Governance Forum, currently being held in Tokyo, Japan.
“Internet and Social Media in Asia: Battleground for Freedom of Expression”, can be downloaded from: http://www.forum-asia.org/?p=14295