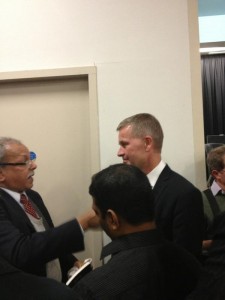 Speaking at the launch of the book ‘Still Counting the Dead’ written by former BBC correspondent Frances Harrison, Solheim said that the Government of Sri Lanka must take immediate steps to reach out to the Tamil community.

He said that if the Government is serious about reaching out to the Tamil community there are four things they can do immediately and that is to release all Tamil political prisoners, stop all disappearances and the so-called “white van incidents”, substantially reduce the military presence in the north and make a formal promise that there will be no state sponsored Sinhalaisation of the north and east.

Former chair of the South African Truth and Reconciliation Commission Yasmin Sooka, who is a member of the UN Panel of Experts investigating the end phase of the Sri Lankan conflict and the International Crisis Group’s Alan Keenan were also present at the launch.

Christine Bacon of Ice & Fire theatre group also outlined her forthcoming play – “the Island Nation” – based upon the book.