Last week’s alleged rape of a 47-year old woman in Wijerama and an attempted rape of a 25-year old German tourist in Chilaw, have once again raised the question, how safe are women in our country—both local and foreign.�According to statistics, five rapes are reported daily while the unreported cases could make the figure higher. 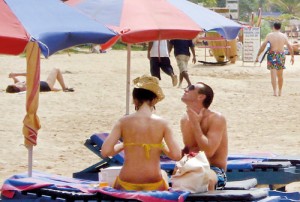 Among the women’s’ group workers and activists who told, Lak Vanitha Front president Shanthini Kongahage voicing concern said many women relied on three-wheeler drivers to ask for road directions. She said many of them also opted to take three wheelers for short distances especially if they were too exhausted to travel home after work in over crowded buses. “ It is unfortunate for a woman to be a victim of rape at around 7.30 p.m. near a place close to the Colombo city,” she said commenting on the incident in Wijerama.

“There were a number of rape and murder cases in Kahawatte last year and a female foreigner was raped by a gang that included the Tangalle Pradeshiya Sabha Chairman. Though investigations were conducted with regard to the rape there was no final report,” she said.

In recent years there have been many cases of foreign women being raped. On Christmas Eve, 2011, a British national was killed and his foreign companion allegedly gang raped by a group led by Tangalle Pradeshiya Sabha Chairman.
Similarly, the same year, another five men were arrested while attempting to molest a 23-year-old Swedish national who was walking on the beach in Negombo. Another woman from New Zealand reported being harassed in Mihintale where two men had tried to drag her to a public toilet while her husband was not in sight.

A South African tourist was allegedly raped by hotel employee in Kalptiya, while another incident was reported from Odiha, Matara where the motel owner had attempted to rape a 25 year-old Dutch tourist.

According to statistics from the Sri Lanka Tourist Development Authority, tourists from Western Europe top the list of tourists in 2011 and 2012. Last year, 373,063 had arrived in the country with the vast majority from Britain, Germany and France followed by South Asian tourists. (The Sunday Times)