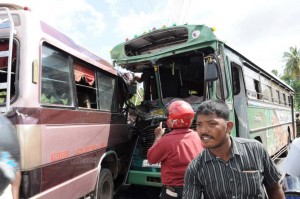 A total of 30,108 road and rail accidents resulting in 1,778 deaths and over 500 railway crossings in the country did not have any protection, while 149 had temporary barriers erected, the UNP said yesterday. UNP media spokesman Gayantha Karunathillake told to the Colombo media that the government had spent billions of rupees on political carnivals such as the Deyata Kirula, motor races, film and music festivals, propping up white elephants such as Mihin Air and on foreign junkets undertaken by the President and his jumbo Cabinet, but was not willing to invest in making the roads safe for the public. “Between 500 to 600 Railway crossings have no protection at all, while 149 had temporary barriers erected and the authorities should rectify the situation immediately before more precious lives are lost.” the MP said, observing that between the first of this year and Nov. 30, there had been a total ofÂ  30,108 road andÂ  rail accidents resulting in 1,778 deaths.]]>