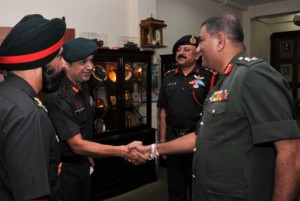 Sri Lanka and India held military level discussions on Tuesday in order to strengthen ties between the armies of both countries, the Sri Lanka army media unit said. The India-Sri Lanka Army to Army Staff Talks (AAST) was attended by an Indian delegation including Major General Gurdeep Singh of the Indian army and Colonel Vivek Tyagi, the Director of Military Training of the Indian Army. The meeting comes even as politicians in Indiaâ€™s southern state of Tamil Nadu continued to raise objections to India providing military training to Sri Lanka. Tamil Nadu Chief Minister Jayalalitha Jeyaram and former Chief Minister M. Karunannidhi had on Tuesday demanded that the Indian government discontinue with the training for the Sri Lanka army. Tamil Nadu has been demanding an investigation into alleged war crimes committed during the final stages of the 30 year war between the Sri Lanka army and the Tamil Tiger rebels. However the Indian government had said it will continue with the training for the Sri Lankan military despite the protests. Following the AAST meeting both Sri Lanka and India are expected to sign the final minutes as an endorsement of the mutual agreement for implementation of the conclusions in the three-day deliberations. The Sri Lanka army media unit also said that the visiting Indian army delegation had separately met the Sri Lanka Army Commander Lieutenant General Jagath Jayasuriya on Tuesday. The AAST held on Tuesday was the second such meeting with the first held in India last year.]]>