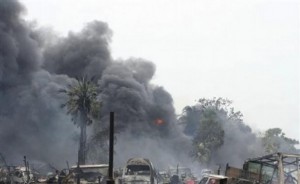 Sri Lanka is banking on cricket to repair the damage to its war crimes after the brutal end to a 37-year ethnic war as it stages the biggest tournament in the nation’s post-independence history. Since declaring an end in 2009 to a conflict that claimed up to 100,000 lives, the Sri Lankan President Mahinda Rajapakse’s government has had to battle accusations that its troops killed thousands of Tamil  civilians as they crushed Tamil rebels in the finale. But as hosts of the World Twenty20, which begins Tuesday in Rajapakse’s hometown of Hambantota, Sri Lanka is looking to rebrand itself as an island of sun-kissed beaches and ancient Buddhist temples rather than as a hotbed of conflict. “The T20 World Cup programme will provide an excellent platform to endorse the new Sri Lanka brand during the next three weeks,” said Nivard Cabraal, the central bank governor and a key figure in promoting Sri Lanka as a sporting destination. “I am confident that this trend will continue in the future, and those so-called international calls for (war crimes) investigation will fade away,” he told AFP. Teams from 12 nations, including those from Australia and England — two nations which have been highly critical of Sri Lanka’s government — are taking part in the World Twenty20, which will culminate in the final in Colombo on October 7. It is the first time Sri Lanka has been the sole host of such a major tournament and underlines its progress since the height of the conflict between government troops and the Tamil Tigers. In 1996, when Sri Lanka co-hosted the 50-over World Cup with India and Pakistan, Australia and the West Indies stayed away from their qualifying games on the island for fear of attacks. It once again co-hosted last year’s 50-over World Cup with India and Bangladesh, but lost the final to India in Mumbai. Sri Lankan authorities have often turned to the cricket team as an example of ethnic unity in the face of allegations that Tamils were discriminated against by the majority Sinhalese community. The United States led a resolution against Sri Lanka at the UN Human Rights Council in Geneva earlier this year and Colombo had been given another year to come up with a road map to address accountability issues. But moderate Tamil legislator Suresh Premachandran said Sri Lanka’s emerging sporting credentials did not address the grievances of his minority community. “Some Tamil youngsters may be happy about cricket and the Twenty20 tournament, but it won’t do anything to address the core issues,” he told AFP, referring to Tamil demands for greater political autonomy. Last year, Sri Lanka also narrowly lost to Australia in its bid to host the 2018 Commonwealth Games, but it is pitching for several other Asian tournaments as part of its drive to become a major sporting destination. Charu Lata Hogg, a Sri Lanka expert at the London-based think-tank Chatham House, believes the government will struggle to turn the spotlight off its tainted record. “Hosting an international sporting event will not deflect international attention on its core human rights responsibilities,” she told AFP. “Attention on the issue of war crimes investigations, is unlikely to cease until there is a genuine effort by the Sri Lankan state to establish accountability.” Her remarks were underscored by a top US diplomat who declared on Friday that there were “questions” about Sri Lanka’s commitment to probe serious violations of human rights during the final offensive and thereafter. “There are lot of questions now about how quickly Sri Lanka is really committed to moving ahead on these things,” Assistant Secretary of State Robert Blake told reporters in Colombo. Blake, the top US diplomat for South and Central Asia and a former ambassador to Colombo, said he had asked for “accelerated progress” in reconciliation and urged de-militarisation of former war zones as well as power sharing with the Tamils. (AFP)]]>