In Sri Lanka last September, a Sinhalese mob led by some 100 Buddhist monks demolished a Muslim shrine in the ancient city of Anuradhapura. As the crowd waved Buddhist colors, gold and red, a monk set a green Muslim flag on fire. The monks claimed that the shrine was on land that had been given to the Sinhalese 2,000 years ago â€” an allusion to their proprietary right over the entire island nation, as inscribed in ancient religious texts. 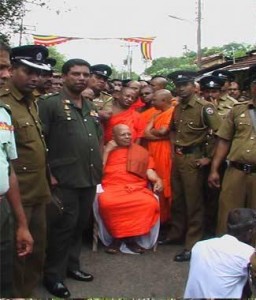 The Anuradhapura attack was not the only recent incident of Buddhists behaving badly in Sri Lanka. In April, monks led nearly 2,000 Sinhalese Buddhists in a march against a mosque in Dambulla, a holy city where Sinhalese kings are believed to have taken refuge from southern Indian invaders in a vast network of caves almost two millennia ago. The highly charged â€” but largely symbolic â€” attack marked a â€œhistoric day,â€ a monk who led the assault told the crowd, â€œa victory for those who love the [Sinhala] race, have Sinhala blood, and are Buddhists.â€

Such chauvinism is at odds with Western preconceptions of Buddhism â€” a religion that emphasizes nonviolence and nonattachment â€” but is in keeping with Sri Lankaâ€™s religious history. Militant Buddhism there has its roots in an ancient narrative called the Mahavamsa (Great Chronicle), which was composed by monks in the sixth century. According to the Mahavamsa, the Buddha foresaw the demise of Buddhism in India but saw a bright future for it in Sri Lanka. â€œIn Lanka, O Lord of Gods, shall my religion be established and flourish,â€ he said. The Sinhalese take this as a sign that they are the Buddhaâ€™s chosen people, commanded to â€œpreserve and protectâ€ Buddhism in its most pristine form. According to myth, a young Sinhalese prince in the second century BC armed himself with a spear tipped with a relic of the Buddha and led a column of 500 monks to vanquish Tamil invaders. In addition to defending his kingdom from mortal peril, the princeâ€™s victory legitimized religious violence as a means for national survival.

Militant Buddhism was a driving force behind the 25-year war between the majority Sinhalese (74 percent of the population) and the minority Tamils (18 percent), who were fighting for an independent state in the islandâ€™s north and east. (Muslims, who make up six percent of Sri Lankaâ€™s population, were often caught in the middle.) During the war, monks repeatedly undercut efforts to work out a peace agreement.

The sangha, as the clergy is collectively referred to in Theravada Buddhism, has historically exercised political power from behind the scenes, embodying a broad form of religious nationalism. But in the later years of the war, it became more overtly politicized. In 2004, the hard-line National Heritage Party (known as the JHU) elected seven of its members to Parliament; all were monks, and the party ran on a platform calling for a return to Buddhist morality in public life. Soon after being seated, the JHU staged an intramural brawl on the floor of Parliament.

The JHU also worked to scuttle a March 2002 Norwegian-brokered peace settlement that called for limited Tamil autonomy. Monks declared that Sri Lanka had always been a Sinhalese kingdom, that autonomy violated the near-mystical idea of a unitary state, and that there was no option other than a military one. Peace negotiations simply made the Tamil Tigers stronger, as one of the partyâ€™s more outspoken clerics, Athuraliye Rathana, whom the Sri Lankan media dubbed the War Monk, argued. â€œIf they give up their weapons, then we can talk,â€ he said. â€œIf not, then we will control them by whatever means necessary. We should fight now and talk later.â€ In the spring of 2006, monks attacked an ecumenical group of peace marchers and led a long sit-in against a cease-fire agreement that soon came apart, leading to another round of fighting.

As the bloodshed wore on, much of the Buddhist clergy gave its blessing to a final offensive on the separatist Tamil Tigers. In May of 2009, the Sri Lankan military emerged from that battle triumphant. But its brutal offensive against the Tigers has made President Mahinda Rajapaksaâ€™s government the target of broad international condemnation. Reliable estimates of civilian deaths range as high as 40,000, and Britainâ€™s Channel Four has documented summary executions of Tamil Tiger prisoners in its program â€œSri Lankaâ€™s Killing Fields.â€ Although human rights organizations, including Amnesty International and the UN Human Rights Council, have called for an investigation into humanitarian abuses and possible war crimes, the Rajapaksa government has resisted. The monks have backed this obstinacy, saying that such demands attack what Sinhalese refer to as the Buddhist â€œmotherland.â€

Since the war ended, Buddhist clerics have been at the forefront of promoting punitive triumphalism. The Sinhalese majority widely views its victory over the Tamils as a ratification of its scripturally ordained dominion, with other groups occupying a subordinate position. Accordingly, steps toward reconciliation have been faltering. Government efforts to resettle the nearly 300,000 Tamils displaced by the fighting, now mostly accomplished, were slow and chaotic, leaving resentment. The military has established large cantonments in Tamil areas, treating civilians with a heavy hand. According to the International Crisis Group, â€œWhen challenged by public protest, the military has shown itself willing to physically attack demonstrators and is credibly accused of involvement in enforced disappearances and other extrajudicial punishments.â€ Although the rehabilitation of former Tiger cadres â€” as many as 11,000 individuals â€” has largely proceeded according to schedule, there have been accusations of mistreatment of prisoners while in custody and harassment of them after their release.

Defense Minister Gotabaya Rajapaksa, the Presidentâ€™s brother, recently said that the north and east were not exclusively Tamil areas, hinting that the government might resume Sinhalese land colonization programs, which were a major point of friction in the run-up to the war. Meanwhile, Tamils have complained that the military has allowed Buddhist temples to be erected where Hindu temples had been destroyed in the fighting, or near traditional Hindu shrines. There are also accusations that monks have taken advantage of the postwar confusion to seize Tamil land, especially in areas adjacent to new military bases. Last year, the ICG warned of a â€œrecipe for renewed conflictâ€ and said that reconciliation â€œseems harder than ever.â€

Another sign of militant Buddhismâ€™s enduring power is the governmentâ€™s refusal to confront the human rights abuses committed in the warâ€™s final push. President Rajapaksa, who went to Kandy, the cultural capital, immediately after the 2009 victory to genuflect to the countryâ€™s top Buddhist clerics, has rejected a UN Human Rights Council resolution, passed in March, that called for an inquiry into humanitarian abuses and possible war crimes. Only recently did the Rajapaksa government concede that there were any civilian casualties at all. In fact, as the UNHRC voted on the March resolution, hundreds of Buddhist monks led a prayer vigil in Colombo against it. Hundreds more led protests when it passed. The Los Angeles Times quoted one demonstrator as saying, â€œEvil forces both local and international have joined hands to deprive Sri Lanka of the present environment of peace and take this blessed island back to an era of darkness.â€

Some see an irony in Buddhist monks aligning themselves so closely with a government that resists accountability for humanitarian abuses. But the greater irony is that, in protecting and preserving their particular form of Buddhism, the Sinhalese seem to have injured it gravely. The sanghaâ€™s preoccupation with politics has come at the cost of spiritual focus. Most monks in Sri Lanka no longer meditate, which is supposed to be Buddhismâ€™s core. Some Western Buddhists have gone on missionary trips to Sri Lanka to revive meditational practice. But success has been fleeting.

There has also been a breakdown in monastic discipline. Last February, a monk was sentenced to death for murder â€” the first monk so sentenced since Talduwe Somarama killed Prime Minister S.W.R.D. Bandaranaike in 1959 after he reneged on the full implementation of a Buddhist nationalist agenda. Over the last decade, there have been nearly 100 cases in which Buddhist monks have been charged with sexual abuse of minors, and many instances of monks, particularly young ones, being cited for public intoxication and hooliganism. The fundamentalist idea that Buddhism is a unique national possession has encouraged a sense of moral superiority, which makes it hard for many Sinhalese to accept how bruised their Buddhism has become. As one prominent lay Buddhist painfully (and discreetly) explained to me more than twenty years ago, â€œBuddhism is hollow now in Sri Lanka. We are only going through the motions.â€ Today, those motions are growing ever more disturbing.

Sri Lankaâ€™s toxic identity politics are not altogether unique, especially in other Theravada Buddhist nations. Buddhist nationalism in Myanmar, for example, provided a similar rallying point against British colonialism. But the conflation of â€œthe land, the race, and the faithâ€ among the majority there, along with a view that this majority is the steward of its own uniquely pure form of Buddhism, has been a great source of political and cultural disharmony with the countryâ€™s many non-Buddhist minority groups, most recently the Rohingya Muslims. Although Buddhism might eschew violence on a doctrinal level, it is not immune from nationalist myths that see a place for it.