Sri Lanka will inevitably be drawn in to power struggle for dominance in the Indian ocean as China increasingly seeks to extend its clout beyond its “traditional areas of operation into the Indian ocean,” a top US political scientist told a gathering in Colombo.

Professor Sumit Ganguly, a renowned US scholar and expert on south Asian affairs said Sri Lanka will have to decide up to what extent they are willing to cooperate with the US to counter a growing Chinese presence in the Indian Ocean. 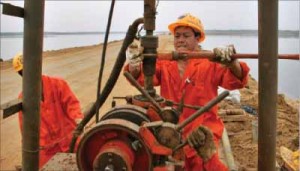 “Inevitably, given Sri Lanka’s extraordinary geo-political location, there will be overtures to cooperate with the US especially if the Chinese navy chose to become more assertive and aggressive in its behaviour,” Gunguly said.

“If the Peoples Republic of China (PRC) challenges the freedom of navigation on high seas or in any way obstructs trade or oil flows from the Gulf, obviously there will be a ramping up of American capabilities,”

“This is a choice Sri Lankan policy makers will have to make about the extent to which they wish to be involved with the US or chose not to be,” he said.

Ganguly was speaking on ‘US foreign policy towards South Asia’ at public lecture held Monday at the Lakshman Kadirgamar Institute for International Relations & Strategic Studies.

Sri Lanka’s diplomatic relations with the United States strained under pressure to investigate alleged war crimes by soldiers and Tamil Tiger separatists during the final stages of a near four-decades of ethnic conflict which ended in 2009.

In March this year the UN Human Rights Council passed a US led resolution backed by the island’s closest neighbor India demanding Sri Lanka to probe alleged rights violations by government forces and the Tamil Tigers.Sri Lanka’s heavy dependence on China for major infrastructure development projects including ports and highways has irked both India and the US over China’s growing investments and influence in the Indian Ocean.

With China seen as the only power that could possibly challenge America’s global dominance, the US is likely to devote more attention and resources to South Asia and strengthen alliance with India to check China’s growing clout in the Indian Ocean.

“It does not quite capture the e amount of spending that’s actually taking place. You have to take into account how much that 100 billion dollars buys in the People’s Republic of China as opposed to the United States,” Ganguly said

“India spends less than five percent of its GDP on its military,”

US shares robust military relations with south Asia’s dominant member, India and is expected to shift a considerable military force to the Asia pacific region within the next eight years.

US Secretary of Defence Leon Panetta told the Shangri La Dialogue in Singapore that the US would shift 60 percent of its naval capabilities to the Pacific and increase the number and size of U.S. military exercises and other naval activity in the region.

Ganguly said strategic, economic and military relations in South Asia will put the region on the US foreign policy radar for the foreseeable future. (LBO)