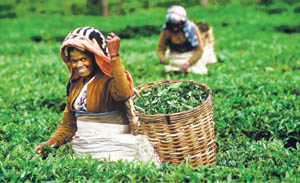 Gross official reserves were at $5.81 billion by end-May from end-April’s $5.84 billion, and were sufficient to finance 3.4 months of imports.Â  Sri Lanka recorded a peak trade deficit of $9.7 billion last year, prompting the central bank to raise policy rates, restricting credit growth, and allow flexibility in the exchange rate by refraining from intervening in the market.Â

Exports of tea, Sri Lanka’s main agricultural crop, fell 7.3 percent year-on-year in May to $109 million and it recorded a 10.8 percent drop to $530.1 million in Jan-May. Revenue from garments and textiles, the island nation’s top exports, fell 13.5 percent to $278.2 million in May. Imports of consumer and intermediate goods fell 11 percent and 10 percent respectively in May, while investment goods rose 11.4 percent compared to a year ago. Sri Lanka imported $268.5 million worth of consumer goods, $972.5 million of intermediate goods and $331.9 million of investment goods in May. ($1=130.8500 Sri Lankan rupees)