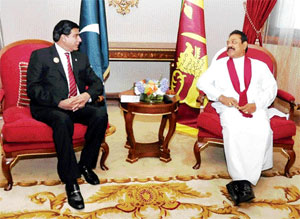 ‘The pearl of the Indian Ocean,’ Sri Lanka, is the closest and friendliest country of Pakistan in South Asian region, the Pakistan Observer reported.

The growing relations between them, particularly after 1999, have further cemented in the fields of economic, trade and defence. Rich Buddhist culture pastures in Sri Lanka which has strong links in Pakistan. So, culturally and historically, both the states have close proximity. Pakistan has stood by Sri Lanka in their hours of need.

After the defeat of the Tamil Tiger rebels in Sri Lanka, Pakistan congratulated Sri Lanka and the Deputy Minister of Foreign Affairs Hussein A. Bhaila of Sri Lanka called Pakistan a true friend saying:

“The government and the people of Sri Lanka have considered Pakistan as a true friend of Sri Lanka, which has always stood by it in times of need…” The evening of Thursday was special for Sri Lankan High Commission here when Air Chief Marshal (retd) Jayalath Weerakkody, High Commissioner of Democratic Socialists Republic of Sri Lanka staged a grand show to share greetings and happy moments with his Pakistani well wishers on the occasion of 65th National Day of his country.

On invitation, a large Pakistani community belonging to different segments of society besides members of diplomatic corps in Islamabad assembled in a hall of a local hotel where Akram Gill, Minister of State for Interfaith Harmony was the Chief Guest to represent the Government. Politicians, students, businessmen and mediamen were part of the show. It was amazing gathering, as they settled in groups to discuss political developments in Pakistan and Pak-Sri Lankan relations after the ceremonial events of playing of national anthems of both the countries and cutting of cake jointly by the High Commissioner, Chief Guest and other eminent personalities.

Jayalath Weerakkody, who enjoyed a brilliant career as head of Sri Lankan Air Force, has struggled in Pakistan as High Commissioner to brining both the states closer to each other on all fronts. He contacted chambers of commerce in Pakistan for investment in his country which has literacy rate on higher side in South Asia. Due to his good nature, he earned a large constituency of friends in official and non-official circles. The High Commissioner, who was the moving spirit in the celebrations, greeted his guests and extended warm hospitality to them.

The feelings of love and friendliness were flowing in the hall. The traditional dishes of Sri Lanka were part of the show, enjoyed by the guests. Pakistan has extended financial assistance to Sri Lanka. Both the states are cooperating on world stage in promoting peace and harmony. Pakistan is the second largest trading partner of Sri Lanka in South Asia. It is the first country to sign a Free Trade Agreement with Islamabad. Bilateral trade is growing on fast track which is expected to attain new heights in the days to come.