The nine employees of the Sri Lanka Mirror website, who were arrested yesterday, were released on police bail today. 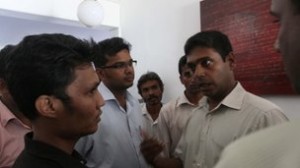 Among those arrested were journalists including women and girls. They were produced before the Hulftsdorp Magistrate this afternoon and given bail and were ordered to appear in court again on the 6th of July.

Several employees of the Sri Lanka Mirror website including some journalists were arrested yesterday following a raid by the Criminal Investigations Department (CID).

Meanwhile the Sri Lankan Defence Ministry said that acting on a court order the Criminal Investigations Department (CID) officials, yesterday sealed the Sri Lanka Mirror office where two websites involved in propagating false and unethical news on Sri Lanka were being operated from.