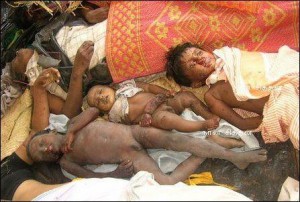 Sri Lanka needs to face an “independent international” investigation into the killings towards the end of the war against the Tamil Tigers, the Amnesty International chief says. “We need a full and independent international inquiry to bring (guilty) people into account,” Amnesty Secretary General Salil Shetty told IANS. He said investigations ordered by the Sri Lankan government into the killings of 2008-09 were not adequate. But Shetty, an Indian, quickly added that the investigation must cover “both sides” — including the Tamil Tigers who too were accused of killing many non-combatants under its control. “And it is not just about 2009. The human rights violations are ongoing (in Sri Lanka),” he said. “There is a current problem too.” Sri Lanka has been accused of unleashing its military, which fought and finally crushed the Tamil Tigers in 2009, on Tamil civilians who lived in rebel territory. Rights groups have alleged that tens of thousands of innocent civilians were also killed along with Tamil Tigers in Sri Lanka’s north in the war that ended in May 2009. Colombo has routinely denied the allegation. Shetty, the first Indian and the third from the Third World to head Amnesty, said “what happened during the end of the (Sri Lanka) war was by any standard a gross violation of human rights”. He said India had been mostly silent on the Sri Lanka situation. “The time has come for India to take a fresh look.”]]>