This year 52 people have gone missing in the country’s south. Most who have disappeared since the end of the war are Tamils, but also at risk are moderate Sinhalese who speak out. In 2009 a prominent newspaper editor was shot and killed; in January 2010, a cartoonist and political analyst, Prageeth Eknaligoda, left his office and was never seen again, the Guardian reorts. 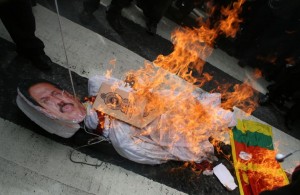 The Committee to Protect Journalists says 23 journalists have been forced into exile since 2007 and only three have returned. Although self-censorship is widespread, intimidation continues. The police recently raided the offices of two websites and arrested nine journalists for “propagating false and unethical news on Sri Lanka”. Reporters Without Borders ranks Sri Lanka 163 out of 179 nations on its global Press Freedom Index.

The Sri Lankan President Mahinda Rajapaksa is enormously popular among the Sinhala Buddhist majority. But critics say he is in danger of squandering the peace. The military runs northern and eastern Sri Lanka, and residents say that anyone who challenges it risks deadly retribution.

But disappearances of government opponents are perhaps the most obvious manifestation of a regime gone wrong, human rights groups say,Â  paper further said.