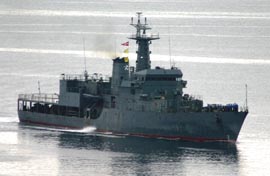 The new Navy Commander Vice Admiral Jayanath Colombage said that Sri Lanka Navy is amply equipped with vessels and craft, however, it is short of a ship with a helicopter on board that many other navies have and a ship with such modern technology would make it easier to prevent the emergence of another threat of an armed group in the country.

He added that the second challenge is to ensure that weapons are not smuggled into the country, which would become a threat to the government.